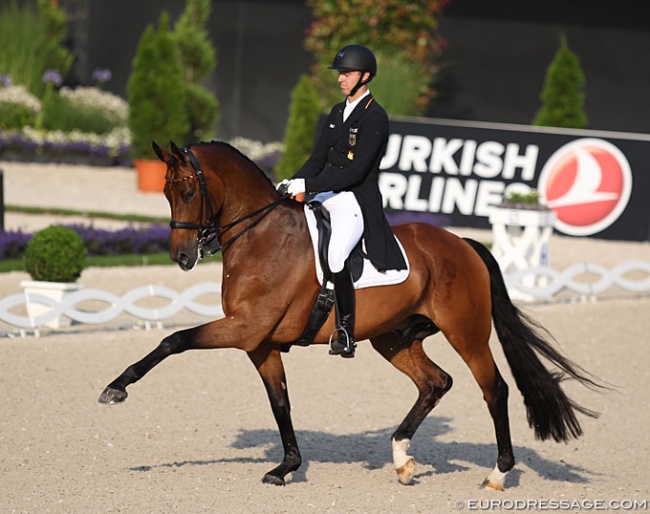 Sönke Rothenberger and the 12-year old Dutch warmblood gelding Cosmo floated to victory in the 4* Grand Prix on the first day of dressage competition at the 2019 CDIO Aachen on Wednesday 17 July 2019.

The 4* Grand Prix served the big whoppers and although no real peak performances were achieved, the class was a very interesting one to watch.

After the 2018 World Equestrian Games in Tryon last September, the pair has been on an extremely light show schedule. Their first start was in April 2019 at the CDI Hagen which they won incredibly convincingly with a Cosmo that had come of age. In May they withdrew from the German Championships in Balve - the first German team selection trials for the 2019 Euros - due to a colic scare and Aachen was only their second show of 2019. Because they didn't ride Balve, the pair was relegated to the 4* tour instead of the 5* tour.

If Cosmo is faultfree he seems to be the best Grand Prix horse on the planet, but getting that mistake free ride is still a challenge on the very sensitive bay (by Van Gogh x Landjonker). Their Aachen Grand Prix test was not their best ride, with the Hagen performance being far superior, but this was not really reflected in the scores. Judges Evi Eisenhardt, Susanne Baarup, Janet Foy, Irina Maknami, and Clive Halsall absolutely marveled at what they saw and rewarded the ride with  81.370%. Hallsall's low score of 79.674% was probably the most accurate.

Rothenberger certainly put in the best test of the class and deserved to win, but he rode with the handbrake on the entire time. The trot extensions are mega but a mini spook at F after the first diagonal but Sönke on sharp and his trembling half halt hands showed that he was making sure the horse would not lose his focus. The half passes were neat, but did not have the biggest ground cover. The passage was very supple and bouncy, but the first piaffe was a bit too forward and the second had some back-stepping with the right hand. The extended walk was mediocre with hardly any overtrack and an unclear 4-beat rhythm (score between 6.5 and 7.5?!). The two tempi changes were solid, the extended canter was barely ridden but the horse has an uphill canter so it still looks good. The one tempi's were correct but needed more ground cover. The pirouettes were small but had too many strides (9 - 10 strides - scores between 7.5 and 10). The final centerline was the highlight was a fantastic passage and a piaffe in a more regular rhythm but a tiny bit crooked. Cosmo is such an amazing horse and there was no doubt that it was a high class test, but it was not the same level shown in Hagen. Still it sufficed for a massive Aachen win and another well-earned checkmark on the pair's list of prominent achievements in their career. After winning the CDI Fritzens at the beginning of the month, Isabell Werth and 13-year old Westfalian gelding Emilio (by Ehrenpreis x Cacir AA) came to Aachen to secure the horse's reserve place for the German team in Rotterdam alongside her number one choice Bella Rose. Werth's accurate test riding continues to be dazzling, even when her bright bay gelding was not as closed in the frame today moving from behind, over the back, into the contact. In passage the hindlegs trailed a bit and he was croup high. In the piaffe Werth was not always able to keep him on the hindquarters, even though the rhythm was excellent. Emilio just lacked a bit of sharpness today. The trot extensions were beautiful though and the half passes smooth, but the gelding dragged his legs in the rein back. In the passage the horse is often lightly bent to the right. The extended walk did not have much overstep, not was it clear in the rhythm. The extended canter was very neat and the zig zag well steered although the hindquarters swayed a bit to the right. The one tempi changes were safe and the pirouettes good. The final trot extension was beautiful and the final centerline rhythmical. The pair scored 79.435% for second place with 77.935% as ow sore of 80.761% as high score.  The same can be said for Danish duo Cathrine Dufour and her 16-year old Atterupgaards Cassidy (by Caprimond x Donnerhall). There was a bit of edge missing to this pair today.  They have also been on a very light show schedule this 2019 show season and in Aachen they avoided a big confrontation with other medal candidates in the CDIO 5* tour by choosing to ride the "lighter" 4* tour, in which only two tests are required to be ridden and Dufour would not meet her biggest rivals. The trot work just looked a bit less fluent that what we are used of the pair. The extensions were good, but  on the short side the collected trot just looked a bit interrupted. The piaffes are not Cassidy's strong suit but he can stay on the spot. The passage is the weak point in which the horse has the hindlegs out and swings much in the hindquarters. Nevertheless there are many incredible things that make this duo so enjoyable: the soft contact, the horse's nose being out most of the time, the wonderfully ridden collected walk and the outstandingly executed rein back and one tempi changes. The pirouettes were small. They scored 78.043% for third place. Hopefully Dufour and Cassidy can improve their form for Rotterdam as there is more in the tank.  Sister and brother Werndl captured fourth and fifth place. While Jessica steered the elegant, lightfooted 15-year old Dutch mare Zaire E (by Son de Niro x Jazz) to 76.587% for fourth place, it was in fact brother Benjamin's ride on Flora Keller's 15-year old Westfalian gelding Daily Mirror (by Damon Hill x Florestan) that was one of the most surprising and intriguing tests of the day.  As last pair to go, Benjamin and Werndl exceeded the expectations. The sympathetic black gelding showed very balanced extended trots, a good rein back and nice suspension in passage. The piaffes are still very timid and hesitant, but there is much quality in the other movements. The two tempi's were nice and straight, the extended canter was energetic and the zig zag clear. The horse sometimes got a bit tight in the neck and needed to have the nose more out in the canter work, but overall there was good riding going on. There was some loss of balance in the left pirouette, but the right one was better. They scored 76.283% for fifth place.

Eurodressage is on the scene photographing all riders in Aachen. If you are interested in photos for print or social media, send us an email.