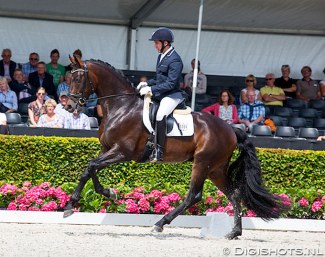 The 2019 World Championships for Young Dressage Horses has a new last minute addition to its official show programme: a competition for 4-year olds, open to stallions, mares and geldings.

In 2016 Ermelo hosted an inofficial 4-year old Championships, exclusively for stallions. Although this initiative was very well received and won by Severo Jurado Lopez and the Oldenburg stallion Furst William HC, the class was scratched from the schedule the next year.

Hungarian entrepreneur Arie Yom-Tov, the driving force behind the CDI-W Budapest, 2020 European Children and Under 25 Championships as well as the 2021 European Dressage Championships in Hungary, will be sponsoring the new 4-year old class, which has will be known as the "Sport Pro Horse Challenge."

"The past year I conducted several meetings with the main organizer of the World Championship in Ermelo," Yom-Tov told Eurodressage. "My main target was to create an additional challenge competition during the FEI World Breedings Championship for four year olds. We agreed on hosting a division and as main sponsor I can say there is nice cash purse involved for the top place getters in the Challenge"

The following prrize money is there for the top five place-getters in each round.

"I think that it’s important to also put the spotlight on the 4-year olds, especially considering that the FEI already has a 4-year old test in place," Arie Yom-Tov explained.