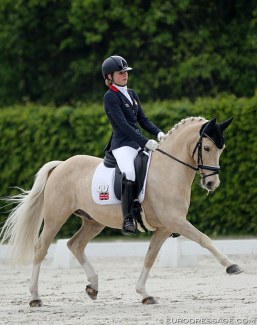 British Dressage has announced the team that will represent Great Britain at the 2019 European Pony Championships in Strzegom, Poland, on 14 - 18 August 2019.

British Dressage under 21 Selectors Judy Harvey, Leanne Wall and Nikki Herbert made their choice of four riders for the team

Representing Great Britain in Strzegom are:

The squad of five will travel to Kent for a final Pony Pre-European Team Camp on Tuesday 6 and Wednesday 7 August at the yard of John Parker International Horse Transport, who are travelling the ponies to Poland.

The competition at Stzegom gets underway on Wednesday 14 August with two days of Team test, where the first medals will be decided. The riders then battle it out for Individual medals over the following two days before the Freestyle honours are decided on Sunday 18 August.