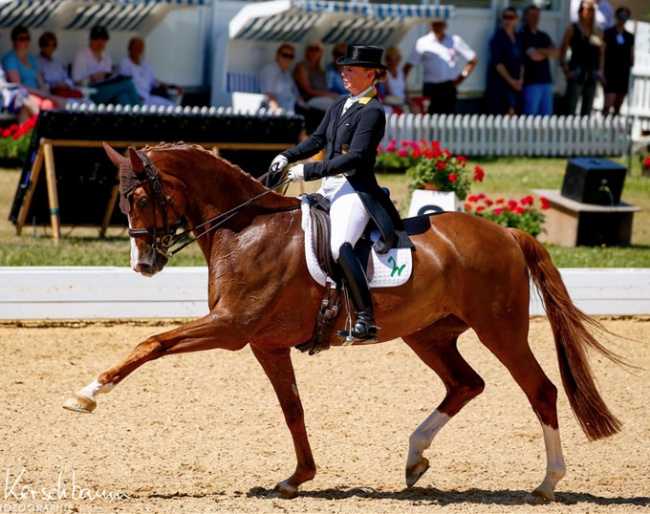 Isabell Werth and Bella Rose easily scooped up the victory in the Grand Prix Special on the third and final day of competition at the CDI 4* at Evelyn and Klaus Haim-Swarovski's Schindlhof in Fritzens, Austria, on Sunday morning 30 June 2019.

In sizzling hot temperatures of 35 ° c, Werth and the 15-year old Westfalian mare (by Belissimo M x Cacir AA) kept their cool and convinced the judges to reward them with 81.511% for their efforts.  The panel of judges, consisting of Baarup, Foy, Eisenhardt, Lang, Sanders, were unanimous although marks ranged between 79.681% and 83.723%.

"Time and again it is moving for me how Bella made her come back to sport," said Werth who is a 6-time Olympian. "Last year she ranked at the same place as today after a three year break due to injury. She showed much go here today despite the heat and in this shape we carefully go from here to to Aachen in the direction of the European Championships in Rotterdam."

Werth's student Lisa Müller, who is the famous soccer wife of German team player Thomas Müller, placed second on another personal best score of 77.106%. Her partner in crime is the 12-year old Oldenburg gelding Stand By Me (by Stedinger x De Niro).

"I never expected this score. I can't complain. For us it is enough reward to be able to show here at this beautiful event with the Alps as incredible backdrop."

Ireland's Judy Reynolds is a return guest to Fritzens and in the Grand Prix Special she placed third on Vancouver K, her 17-year old Dutch warmblood by Jazz x Ferro. They scored 73.511%.

The first class in the morning, the consolation Grand Prix, featured five riders and was won by Russian born Italian Tatiana Miloserdova aboard her 9-year old KWPN gelding Florento Fortuna (by Sorento x Rubiquil). They scored 68.043%.