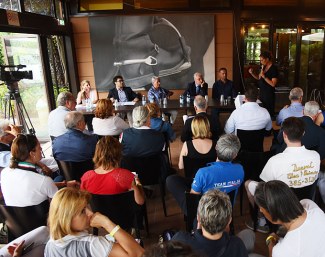 At the 2019 CDI-PJYR San Giovanni in Marignano the organizing team at Horses Riviera Resort held a press conference to give an update on the progress leading up to the 2019 European Youth Dressage Championships.

Grazia Rebagliati Basano, adviser and contact person for FISE Dressage, opened the meeting by presenting the event which will take place 24 - 28 July 2019 and which will host the best young European riders.

The Regional Federations of Emilia Romagna, Marche, Toscana and Umbria, represented by their respective Presidents, Ruggero Sassi, Gabriella Moroni, Massimo Petaccia and Mirella Bianconi Ponti, will participate in the opening ceremony of the championship with a pony carousels, followed by an evening show presented by Amahorse. Riccardo Volpi, owner of the leading company in the production and distribution of clothing and accessories in the equestrian world, and a passionate founder of the Fonte Abeti Breeding was also present at the press conference.

Daniele De Paduanis, president of the organizing committee, thanked the International and National Equestrian Federation for the organizational commitment, the patronages of the Emilia Romagna Region, the Municipality of San Giovanni a Marignano and the Municipality of Cattolica, as well as the numerous partners of the event, such as Riffeser Group (Cavallo Magazine, Il Resto del Carlino, QS and Quotidiano.net), Land Rover, Cavalleria Toscana, Kep Italia, De Niro Boot, jeweler Giovanni Raspini, the manufacturer of equestrian tack boxes and Tre Emme Viaggi agency.

Show director Cesare Croce outlined several aspects and innovations that will take place at the 2019 European Youth Riders Championship. For example the use of the eDressage system, designed by Black Horse One, a global technology and IT-company, led by Daniel Göhlen. eDresage was used at the FEI World Cup finals in Gothenburg and at the CHIO in Aachen.

The system will be in place for the upcoming European Youth Dressage Championships and enables to transmit the judges' marks in real-time and to store them in a secure SAP iCloud Platform. This way the classifications can be generated immediately after each class and the score sheets will be sent to the rider via e-mail.

The show organizers consider this also part of respecting the planet and environment for future generations in the equestrian world. The current one will come together from 24th to 28th of July at the Horses Riviera Resort.