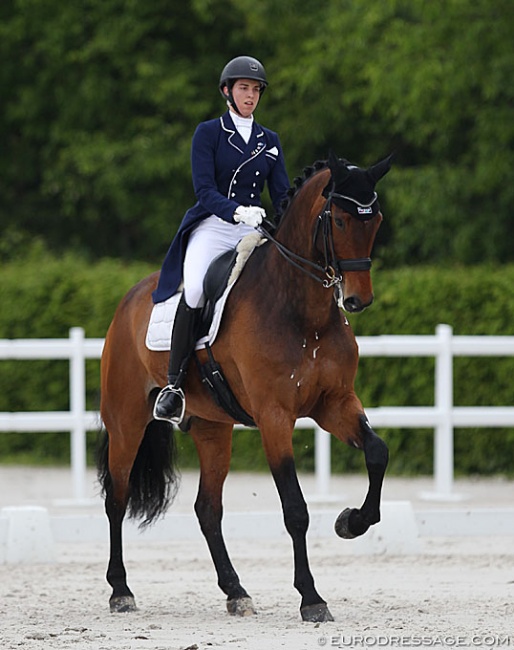 Behroez is a 13-year old KWPN gelding by United out of Voiya (by Gribaldi).

Millis scouted the bay gelding as a 5-year old and trained him up to Grand Prix level.

The pair made its international show debut at small tour level at the 2016 CDI Valencia. She competed him at that level through the summer of 2018. In the autumn she moved Behroez up to medium tour level and campaigned him at the CDI Le Mans in October 2018, winning the Intermediaire B and Inter II. She returned to Le Mans in February 2019 for two more medium tour starts.

In the spring Millis sold Behroez to her student, French junior Camille Audo, who is currently based with Sarah in the U.K.

"We made the difficult decision to sell my upcoming GP horse Behroez," Millis told Eurodressage. "Camille is a very talented rider and they are already starting to form a very good partnership. We are excited to see what the future brings for them. My focus will now be on our up and coming younger horses."

Audo made her show debut on Behroez at the national show in Keysoe. Her international debut was at the CDI Saumur in May, where she was 9th twice in the young rider classes. At the CDI Compiègne two weeks later she posted 67.549% and 66.569%.