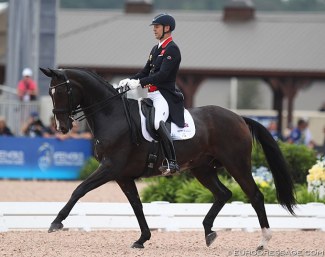 British WEG team rider Spencer Wilton has pulled himself out of contention for a team spot for the 2019 European Championships in Rotterdam this summer.

In agreement with his horse's owner Jen Goodman, Wilton has decided to give the 16-year old British Hanoverian Super Nova (by De Niro) a break.

The tall bay gelding Super Nova was originally owned by Carl Hester and Roly Luard but sold to Goodman and Wilton in 2012. The pair made its international show debut at small tour in 2013 and moved to Grand Prix level in 2014.

The pair first made it on the British team for the 2016 Olympic Games in Rio, where they were 21st in the Special. At the 2017 European Championships in Gothenburg they were 13th in the Freestyle.

Super Nova got injured  in the winter of 2017-2018 and missed the majority of the show season that year. He returned back on the team with the minimum mandatory CDI Grand Prix stars in 2018 (at the CDI's in Hartpury and Hickstead), but twice withdrawing for the GP Special. At the 2018 World Equestrian Games, their 74.581% Grand Prix score helped secure bronze for Team GB. They withdrew again for the Special.

Today Spencer announced that the horse will not be running for a team spot for the 2019 Europeans.

"After a lot of thought and discussion Jen Goodman and myself have decided to give Super Nova a slightly quieter 2019. We are going to stand down from this year's selection process for the European Championships. Our goal is the Tokyo 2020 Olympic Games and with him being 16 years old this year and having done an Olympics, Europeans and World Games in consecutive years we feel that by taking the pressure off this year it will hopefully give us the best chance of making one of the three places available on the Olympic team next year."

Since Tryon, Wilton has not competed Super Nova. According to Spencer, the horse "is feeling on tip top form. He nearly succeeded in bucking me off last week! So the new plan is to give him a quiet summer and then to do a couple of shows this autumn in preparation for next year's campaign."

He added, "Team GB have got some really fantastic combinations up for European selection this year, with great medal prospects, so good luck to everyone in contention."