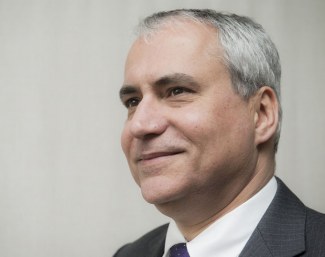 Ingmar De Vos, President of the Fédération Equestre Internationale (FEI), has been elected to the Association of Summer Olympic International Federations (ASOIF) Council at its General Assembly held during the SportAccord World Sport and Business Forum in the Gold Coast (AUS).

The Belgian native, who was elected in the first round of voting, is also a member of the ASOIF Governance Task Force which was created in November 2015 to promote and ensure a culture of good governance within International Federations.

“I am truly honoured to be elected as an ASOIF Council member and would like to thank my colleagues for their confidence in me”, the FEI President said. “It was a close vote but I was happy to be elected in the first round. I’d like to congratulate my colleagues who were also elected today and look forward to working together with my fellow Council members to further the mission and role of this important organisation in the Olympic movement.”

Marisol Casado and Morinari Watanabe were elected in the first round of voting, alongside Ingmar De vos. The ICF President José Perurena, who was originally standing for re-election together with Marisol Casado, withdrew prior to today’s vote, leaving six candidates.

The ASOIF Council is responsible for preparing and conducting the General Assembly as well as implementing its decisions. The Council is composed of the President, six elected members from different Federations, as well as the ASOIF Executive Director, who is nominated by the Council on the proposal of the President as an executive position but does not hold voting rights. The President and the six members are elected for four-year mandates.

Two of the three vacancies that were filled today became available following the completion of the terms of Marisol Casado and José Perurena, and the third was as a result of the sudden death last year of former FIBA Secretary General Patrick Baumann at the Youth Olympic Games in Buenos Aires.

“I am very glad that the FEI President Ingmar De Vos was elected to the ASOIF Council today”, ASOIF President Ricci Bitti said after the election. “Ingmar has been a great contributor to ASOIF’s various projects, including the Governance Task Force, Governance Support and Monitoring Unit, Role of International Federations, and I am confident he will continue to bring expertise to ASOIF’s work as a Council Member.”