Nowag and Lindner Submitted to German Under 25 Squad 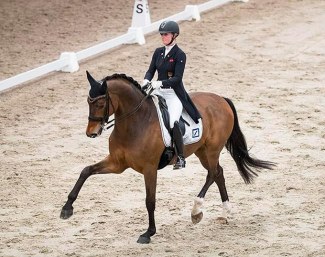 Following the Piaff Forderpreis qualifier in Mannheim on 9 - 11 May 2019, the German Equestrian Federation has updated the German Under 25 squad with two riders: Bianca Nowag and Ann-Kathrin Lindner.

Nowag is no new comer to the Under 25 squad. Aboard the now 15-year old Westfalian mare Fair Play she won team gold at the 2018 European Under 25 Championships in Exloo last summer. Fair Play RB, however, been dropped from the squad as the mare has been retired, but the 24-year old Nowag is now back on the team with a new ride, Michele Widner del Pino's 10-year old Hanoverian gelding Sir Hohenstein (by Sir Donnerhall I x Hohenstein) .

The current German U25 squad includes: