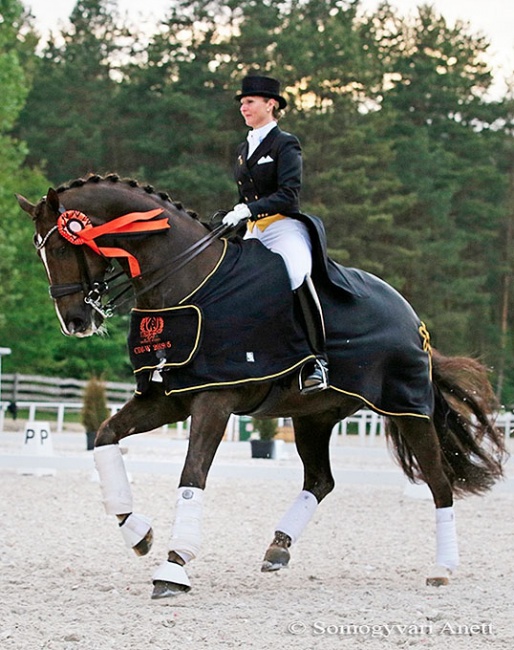 Australian Olympian Kristy Oatley cleaned up the competition at the inaugural Central European League world cup qualifier in Budapest, Hungary, on 2 - 5 May 2019.

Hosted at Stable Unikornis in Pilisjászfalu on the outskirts of Hungary's capital Budapest, the CDI-W aimed at setting a new standard for international dressage competition in the country. With excellent footing, a top panel of five-star judges and perfect conditions for horse and rider, the CDI-W Budapest drew out a solid field of competitors and offered a 10,000 euro cash prize to the winner of the big tour.

The Hamburg based Kristy Oatley and her 15-year old Hanoverian gelding Du Soleil (by De Niro) were on song in Budapest sweeping the Grand Prix for Kur with 73.913% ahead of Russia 2019 World Cup finalists Regina Iscachkina and her 10-year old Rhinelander stallion Sun of May Life (by San Amour). They were second with 71.261% and edged out French Morgan Barbancon on the Dutch warmblood Bolero (by Johnson) on 71.109%.

In the Kur to Music for World Cup ranking point, Oatley was a league of her own and topped the board with 78.625% while the competition trailed behind her. Dutch Hans Peter Minderhoud slotted in second on the Dutch warmblood Zanardi (by Rubels) with 74.475%, while Isachkina was third with 74.000%.

"Düse felt great in the tests," Kristy told Eurodressage about her horse's achievements in Budapest. "More confident, accurate and I’m able to use his power in all the movements."

Oatley set a new Australian record score, taking over the Australian Grand Prix record from cousin Lyndal Oatley (72.800%) set in 2015. Kristy already held the Kur record which she set at 79.330% in Salzburg five months ago.

"I seriously didn’t think about any type of record, it’s an honour and great achievement to have," said Kristy. "The main thing is that I’m pleased with the progress the horses are making. He’s in top form!"

For the past year Oatley has been working with German based Dutch trainer Ton de Ridder. "We’ve been working on using his power in a positive way in all the movement," said Kristy.

Oatley praised the conditions at Stable Unikornis who first the time hosted such a big calibre international event. She also brought along her daughter Rose who made her international debut in the pony classes and completed a trifecta, winning all three rounds with mid seventy percentage scores.

"The competition was lovely, great organisation, lots of possibilities to ride in a lot of classes," Kirsty explained. "The advantage for me was to combine myself and daughter at one show."