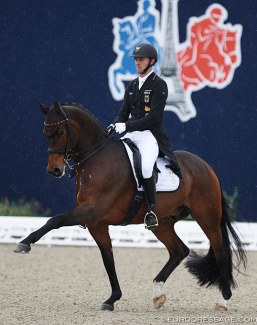 Sönke Rothenberger and his Dutch warmblood gelding Cosmo were in command of the Grand Prix for Special, topping the leader board at the 2019 CDI Hagen on a rainy Saturday 27 April 2019. The pair was a league of their own and easily edged out Isabell Werth on Emilio and WEG team mate Jessica von Bredow-Werndl on Dalera TSF.

In their first show since winning team gold and placing fourth, just off the podium, at the 2018 World Equestrian Games in Tryon, Rothenberger and Cosmo returned to Hagen to show maturity. With a safe and secure ride, they were far from ring rusty after a six-month show break. Today, Rothenberger proved that if the 12-year old Cosmo (by Van Gogh x Landjonker) stays faultfree, he is currently the best and most complete dressage horse in the world, without a doubt.

The trot extensions were textbook with the nose forward, the frame opening and the strides lengthening. In the beginning of the ride Sönke was a still a bit shaky with his hands and half halts but he became more quiet through the ride and the horse was consistent in the frame. The half passes were smooth, the passage bouncy and floaty. The first piaffe travelled slightly forward and the second had a tiny bit of backward tendency but the rhythm was sweet. The only real issue in the test today was the extended walk, which did not have the required clarity in the rhythm and ground cover. Surprising. The walk was never the horse's strongest gait, but whereas everything else had improved on Cosmo, the extended walk had become underwhelming. The collected walk was good. The tempi changes and especially the ones were phenomenal, as well as the uphill extended canter. The pirouettes were small while the right one could have had more bending. The final centerline was wonderful.

Isabell Werth brought the 13-year old Westfalian gelding Emilio (by Ehrenpreis x Cacir AA) to Hagen and landed second place with a generous 79.326%. The bay gelding is Werth's third Grand Prix horse with 80% scoring capability but he was just not as sharp and switched "on" today. He was switched on, but not with his mind on the task at hand. There was much head bopping and shaking going on and the contact was not as quiet as we are used to of Werth. The trot extensions are very nice, but in the half passes there could have been more suspension despite the big ground cover. In the first piaffe the horse leaned on the forehand and the hindlegs were not as crisp and sharp under the body as usual. The extended walk had good relaxation but there could even be more overstep. The collected walk was mediocre: it was too free in the contact, no true collection and just short. The second piaffe and passage were well executed and on the spot. The extended canter was powerful, the zig zag could have had more uphill tendency. The pirouettes looked easy. In the tempi changes Emilio looked like a rocking horse with his unsteady head. The final centerline was very smooth. We've seen Werth ride tighter more polished tests than this one on Emilio. The judges had her between first and second place with marks between 77.826% and 81.739% Jessica von Bredow-Werndl and Beatrice Burchler-Jeller's 12-year old Trakehner mare Dalera BB (by Easy Game x Handryk) are also improving show by show. The bay mare has made a big leap forward since Hagen last year, which was the mare's second CDI at Grand Prix level in her career. The tall bay mare showed nice trot extensions. The half pass to the right was not entirely regular and smooth, to the left was better. The first piaffe had a very good rhythm but was slightly crooked to the left. In the collected walk the mare could have been more closed. There was a break into canter in the second passage, but Werndl recovered quickly. The second piaffe had a very good rhythm but she could lift even more in the withers. Dalera showed lovely straight tempi changes but could lower the croup more. The right pirouette was the best one an the final centerline was very nicely ridden. They finished on 77.391% with marks going from 74.011 to 78.696%.

Swedish Juliette Ramel and her 13-year old Dutch warmblood Buriel KH (by Osmium x Krack C) slotted in fourth. The test had several amazing highlights but there were also working points if the pair wants to achieve even higher scores. The halt has improved massively. Where the horse refused to stand still a few years ago, he now is halting immobile as the rider salutes. The trot extensions were hurried and although the horse easily achieves much overstep, Buriel stays too closed in the frame instead of lengthening it and stretching the top line. The half pass to the right lacked bending, but there was good crossing of the legs. The first passage was lovely and the piaffe had good rhythm. The extended walk was a bit limited but had ok relaxation. The second pi-pa tour was super although the passage sometimes could cover more ground. In canter he was uphill in the diagonal for the extension. One change in the twos was short but the ones were wonderful. Also one change in the zig zag at the start was interrupted. The pirouettes were beautiful. Overall Buriel stays nicely up in the bridle, but he needs to become more elastic in the contact, stretching into it. They scored 76.783% with 74.783% as low score and 78.804% as high mark.

Benjamin Werndl has a new star to ride and now finally seems to be knocking at the door of the world elite. Aboard Flora Keller's Daily Mirror he already made a splash at the 2019 World Cup Finals in Gothenburg but with Keller's 10-year old Oldenburg gelding Famoso OLD (by Farewell III x Welt Hit II) he seems to have a star to ride! The halt at entry was not as polished as the horse dropped the canter, but the extensions were nice and the half passes regular. There was a very nice rhythm in the first piaffe but the horse leans on the forehand. The extended walk had good overstep. The second passage was not entirely regular behind and this also happened on the final centerline where he'll throw in a few shorter steps with the right hind. The transitions in and out of piaffe are super smooth though, a real highlight. The two tempi changes can be straighter and in the zig zag the hindquarters swayed to the right, but Werndl stayed focused and completed the movement well. The pirouettes were well ridden but the flying change at X had the hindquarters crooked to the right. The pair gave a strong impression of what is to come. They scored 74.913% and had the judges in unison. Swedish Therese Nilshagen and Lodbergen's 12-year old Oldenburg stallion Dante Weltino (by Danone x Welt Hit II) were on good form in Hagen. The black stallion was nicer in the contact, light but seeking it more. The half passes were sweeping, the passage bouncy but not always totally regular. In piaffe the stallion stays well on the spot. The extended canter and pirouettes are always a highlight. The ones were great, the twos could have been straighter. In the zig zag the balance could have been better. They finished sixth in this strong field with 73.891% with marks going from 71.413% to 75.217%.

Hubertus Schmidt was not a happy camper when he came out of the arena and saw 72.913% flashing on the board. With Gut Neuenhof's 10-year old Westfalian stallion Escolar (by Estobar x Furst Piccolo) he rode a strong test and expected much higher marks. The young stallion is Schmidt's new team hopeful and the horse certainly had incredible basic gaits with the uphill, ground covering canter being very impressive. The rider had the horse in a light contact and maybe that was also the issue. The horse was too free and open in the frame, which resulted in the hind quarters not being entirely quick and engaged for all the heavy work. The passage, for instance, had much suspension and good regularity, but it lacked collection. In the canter work the hindquarters swayed too much in the changes. The halt at entry was also stretched, but square. The horse has talent for piaffe but could be a bit quicker from behind. The one tempi changes and canter pirouettes were high points. There is definitely more in the tank.

Danish Anders Dahl brought his new hope to Hagen as well, Fiona Bigwood's 10-year old Belgian SBS bred Fidelio van het Bloemenhof (by Fidertanz). The pair made its international show debut at Keysoe a month ago and the chestnut seems to be Dahl's new bid for a Danish team spot. The horse has a beautiful piaffe with a steady rhythm and an expressive passage. Sometimes the horse is a bit more engaged with the right hind in the passage. The extended trots were very ground covering but a bit rushed. The pirouettes were small and the changes big. They finished 8th with 72.283%.