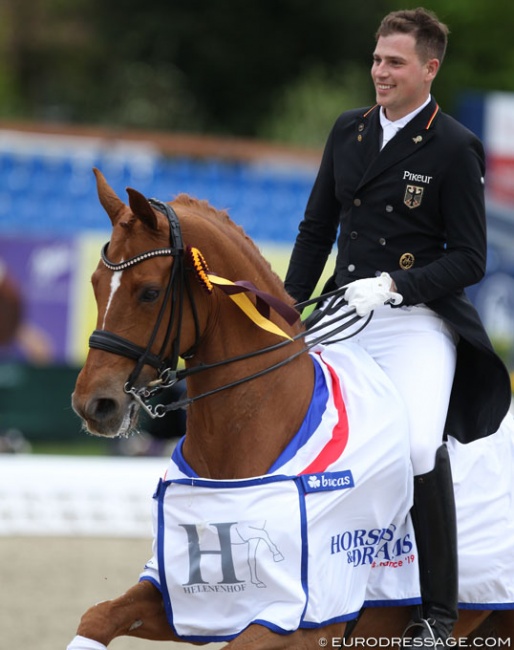 The Grand Prix for Kur included a field of 21 international dressage riders from no less than 12 different countries. The class was judged by Almasy (FRA), Lehrmann (GER), Maknami (RUS), Plewa (GER) and Torrente (COL). The class took place on the second day of competition at Hof Kasselmann and the event was blessed with gorgeous, sunny weather and 20 C° temperatures, which brought out the crowds to watch the test as well as lounge on the grass near the warm up arena.

The 32-year old Wandres is a professional rider  at Hof Kasselmann and steered Ullrich Kasselmann's 12-year old Oldenburg bred Duke of Britain (by Dimaggio x Rubinstein) to victory on a 73.848% score. The sympathetic chestnut showed solid trot extensions and half passes. The passage was consistent although the gelding could have pushed a bit more from behind. In piaffe the horse nicely pushed the back up instead of hollowing it. In the extended walk the horse could have covered more ground but the relaxation was good. Duke produced lovely, straight two tempi changes but there was a mistake in the ones. The pirouettes were small.  Wandres scored between 71.522% and 76.630% from the five judges.

Swedish Patrik Kittel brought Françoise Trembley's 11-year old Swiss mare Well Done de la Roche CMF (by Furstentraum) to Hagen in her second show in 2019 since the 2018 World Equestrian Games. The gorgeous, bay mare was very hot to trot which compromised all three extended gaits as she would not stretch forward and over the back in walk, trot nor canter. She did not achieve any overtrack in the walk and trot extensions; the canter extension was powerful and uphill, but there was no lengthening of the frame. Also the piaffes failed to complete and two of the three did not have the required amount of steps. The trot half passes were wonderful though because she has massive freedom in the shoulder. The zig zag was correct and both tempi series were clean but short.  Kittel kept a very quiet contact with the bridle, but the curb was the leading rein. Well Done just did not find the swing of things today. She finished on 73.022% with marks going from 70.978% to 74.891%.

For Dutch duo Diederik van Silfhout and the 10-year old Dutch warmblood stallion Expression (by Vivaldi x Vincent) it was a good day in Hagen. The combination really showed a new level compared to their last CDI start in Lier in March. The cute bright bay stallion covered ground in the extensions, but the hindquarters trailed in the half pass to the right. The steps in the rein back were big and diagonal. The first passage was neat but the first piaffe a bit too forward. The extended walk was mediocre. Expression piaffes a bit like some Andalusians do: there is much lift in the legs but not truly jumping on the diagonals to create a moment of suspension. His second piaffe was like that. In passage he did track up well. Van Silfhout was coached by Nicole Werner in Hagen. The extended canter was uphill, but there needed to be more lengthening of the frame. The zig zag was good and the pirouettes small. In the piaffe at X Expression swayed much in the hindquarters but kept the rhythm going. They finished third with 72.652% and marks going from 70.761% to 74.457%.

Swedish Antonia Ramel and the 13-year old Dutch warmblood Brother de Jeu (by Voice x Jazz) slotted in fourth. The tall and narrow black gelding is a big mover and produced big extensions. The hindquarters trailed in the half pass to the right, but there was much ground cover. The collected trot often became too passagey. In the extended walk there was much overstep and a clear rhythm, though the nose could have reached more forward. Brother showed good suspension in passage even though the hindlegs could reach more under. In piaffe he got very narrow behind and crossed the legs though, but the rhythm was ok. The series went well despite some swaying in the two's and the pirouettes succeeded bit needed to be a bit more tidy. They posted 72.630% on the board and had the judges quite in unison.

Ingrid Klimke and the 11-year old Hanoverian stallion Franziskus (by Fidertanz x Alabaster) landed fifth place after a ride over par. The bay stallion was focused and with his rider. He did not go as wide behind in the trot extensions as usual and there was much crossing in the half passes. The passage work was regular, the piaffes turned out well but the transitions were still laboured. The extended walk had sufficient overstep but the stallion needed to relax a bit more. The extended canter was powerful, the two's clean, but in the ones there was a miss in the first change. The left pirouette was the best one of the two. Overall Franziskus could have been a bit more up in the poll. They scored 72.587%.