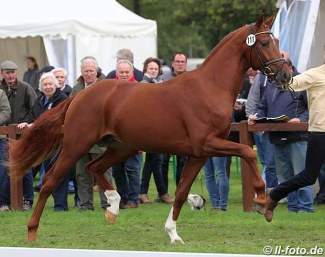 After wining the sport test in Munich in March, Bernd Beisler's chestnut Wicked Game (by Woodlander Wild Child x ) scored the highest overall of 8.35 points, with a 9.08 for dressage and a 7.30 for show jumping. The colt also got 9 for character,8.5 for trot, 9 for canter and 9.5 for walk, 9 for rideability, 6.5 for jumping in freedom and 9.5 under the test rider.

The third best scoring stallion was Bourbon (by Baccardi x Lissaro) with an 8.13 overall. He got 8.65 for dressage and 7.2 for jumping.  He was purchased by state studs of Marbach and Celle at the 2018 Westfalian licensing for 144,000 euro.

Stallions have to score a required overall minimum of 7.5 (or above 8 for dressage or show jumping) to maintain their licensed breeding status.

Blue Hors stud's newest acquisition Zen (by Zack x Furst Heinrich) scraped by and passed with the minimum score of 7.50.