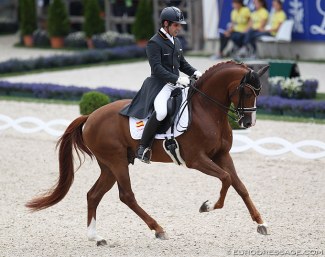 Eye Catcher was originally owned by Singaporean Titan Wilaras but sold to Andreas Helgstrand as a sales horse one month ago. The horse has now been resold to Saborowski for Kanerva to ride.

The Finnish Emma Kanerva has been based in Germany for the majority of her professional career. Initially working from Hubertus Schmidt's yard, Kanerva spent a brief period in Great Britain with Emile Faurie. In 2016 she returned to Germany to set up her own shop and began riding for Saborowski.

"The plan first is to get to know the horse and then we will see about the shows," Emma told Eurodressage. "The future goal is at the Olympics."