Parra Brings Sir Beckmann Up Through The Ranks, Winning 7-YO Classes at 2019 CDI Wellington 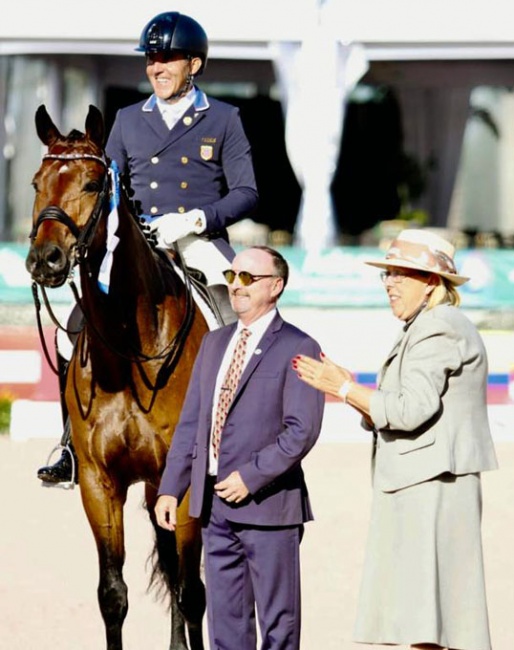 The 2019 Global Dressage Festival (AGDF) will go on record as another successful season for Dr. Cesar Parra of Performance Farms.

Well known in the international dressage community for always having a stable full of happy talented horses, Parra continued to gracefully dance his way into the winners circle on some of the most willing equine athletes around. Most recently, Parra’s success has been with the big, gorgeous Hanoverian gelding, Sir Beckmann (Sir Donnerhall x Witchita).

Bringing this young horse up through the ranks over the last few years has been a joy for Parra, and he feels Sir Beckmann is coming into his own.  His outstanding performances in the FEI Tests for 7 year olds during Week 10 of AGDF showed off the pair’s hard work.

“The horse felt really fantastic with such amazing gaits,” Parra recalls about Sir Beckmann, “He did everything nice and clean overall.  I am very, very pleased with him. I love him very much, and I’m looking forward to what he’s going to bring in years to come,” he adds.

Receiving gait scores of 9 on trot and 9 on canter, Sir Beckmann stepped up and made his rider proud. Parra describes that showing as a 7 year old can be challenging, but his horse was up to the task at hand.

“The 7 year old classes are a little bit different from the 4, 5 and 6 year olds. In the 7 year old, you have two sets of scores,” he explains, “One set of scores is about the gaits and normal things like with the 6 year olds, but then you have another score sheet which is as if you were in a Prix St. Georges. So, a 7 year old has almost the same requirements as a Prix St. Georges, which is pretty intense and demanding for such a young horse.”

Parra goes on to say that he is looking forward to bringing Sir Beckmann up further through the ranks as he matures.

“The plan is to be very vigilant in his development and training to make sure he keeps loving what he does,” he explains, “We really want to have a happy athlete. We want him to have harmony, and we want him to be comfortable.  I don’t think he’s learned yet how to fully move through his body, so that’s what we’re working on,” Parra continues.  He also explains that he’s only planning to show Sir Beckmann once a month going forward. “I don’t want to show him too much because I don’t want him to get sour at the shows,” Parra describes, “I want him to be happy in the show environment.”

Parra also says that he’s added a little something extra to Sir Beckmann’s training program. “I’ve been taking him on a lot of trail rides, which in the beginning was a little scary, but it’s getting better and better!” he smiles.

The extra time, love and attention that Parra gives to all horses in his charge is consistent with his personal philosophy, as well as that of the classical training methods of Performance Farms. Parra’s philosophies by which he conducts his life are discipline, courtesy, integrity, perseverance, self-control, sharing, and strength of character. These are the same qualities he tries to pass on to the students and staff who make up his team.

The Classical Training Methods are those taught by the old Masters and perfected by some modern-day riders. These Methods are based on the Training Scale: Relaxation, Rhythm, Contact, Impulsion, Straightness, Collection. (Losgelassenheit, Takt, Anlehnung, Schwung, Geraderichtung, Versammlung).  This Training Scale is the foundation of the Classical System and of Parra’s training philosophy.

Located in Whitehouse Station, New Jersey, and also Jupiter, Florida, Performance Farms provides its clients with full-service training programs that are tailored based on the needs of the individual horse and rider combination. For more information, visit the website at www.piaffe-performance.com