Will Swiss Dressage Disappear into Insignificance? A Podium Discussion on the Future of the Sport 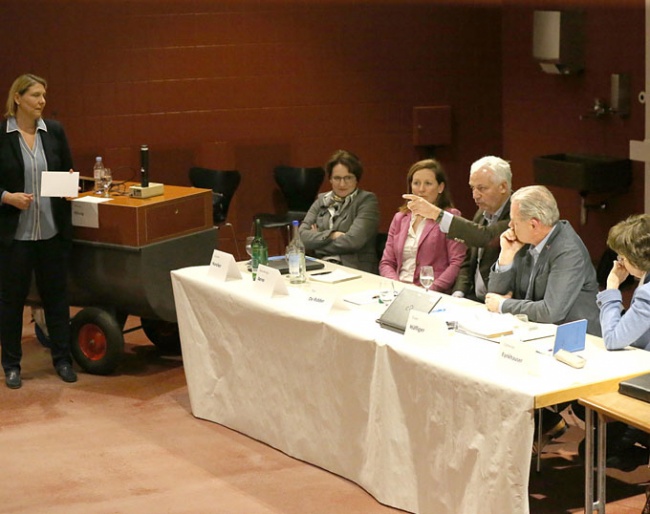 The Swiss participation at the World Equestrian Games in Tryon (USA) last September was the final straw. Too expensive an expedition, said the critics. The money could have been invested more usefully instead of flying a chanceless team to the U.S.A. In the team ranking they were 13th out of 15 nations, a disgrace for the once so successful Swiss dressage sport.  The Swiss Equestrian Federation (SVPS) did not reflect on this misery, on the contrary, it embellished the performances, which is not enough to achieve success!

"How Further with Dressage? Having fun is not enough!" was the title of a public podium discussion organized by the East Swiss Riding Society (OKV) and the Silvia Ikle Dressage Academy to which interested visitors were invited on 25 March 2019.

On the discussion were the triple Swiss champion and multiple team rider Anna-Mengia Aerne Caliezi. Ton de Ridder traveled from Germany as coach and former trainer of the Olympian Marcela Krinke-Susmelj. Susuanne Hunziker was present as representative of the dressage departiment of the OKV, which is Switzerland's largest region equestrian society. Furthermore there was Catherine Fankhauser, who is responsible for dressage at the CHI Geneva, as well as Franz Häfliger, SVPS chief sport director, as sole representative of the national federation.

Approximately 150 people were in the crowds listening and reciprocating to the podium discussion. Ton de Ridder began by delivering a clear statement: 75% is the minimum standard; who can't achieve this has little chance to reach a kur to music finals at a Championships. That is why it is important to train with focus and to buy high quality horses and train them. An excited discussion followed in which riders judges, vets, sponsors, partners and youth riders participated.

An exciting debate followed on several matters: why did we fall so deep? How do we move out of this crisis? Why is money being handled so carelessly by the federation? Why do we fly to Tryon instead of investing more in youth? Also some questionable decisions taken by team captains Genevieve Pfister (seniors) and Heidi Bemelmans (youth) were being discussed and queried by parents and riders.

The poor performances of the Swiss can not longer be embellished, said a professional rider: "We don't have enough good riders and really good upcoming horses," an auditor added. Also Ton de Ridder stated," I didn't see a single Swiss in the finals of the World Young Horse Championships."

The federation needs to develop new strategies, several auditors expressed. Also the financial means need to be spent better instead of doing "Championship Tourism." What was also being discussed is that two riders shortly before the nations cup at the CDIO Aachen canceled their entry just a few days before the event, now that Switzerland was invited again after so many years. Ton de Ridder hit the nail on the head: "You have to compete against the best in the world, when one wants to ride Championships."

"We're being disrespected and attacked," said Martin Kroll, who as a sponsor pulled the plug and gave his horses to a foreign rider because the trench wars and disagreements before the World Championships. At the same time three department members resigned, amongst them the esteemed discipline manager Martin Wyss. At the same time it was announced that the veterinary committee had stepped down, worn out from the failing competence within the Swiss Federation. The former committee chair Marco Hermann attended the podium discussion.  Only the managers of the dressage department of the Swiss Federation disapproved the forum with a press release a few days before the event. One representative was in the audience though.

Now it is time to work out a plan and go to the federation with concrete proposals. To get the Swiss back on course, heads needs to roll. Otherwise the fear will be justified that this former dressage nation will disappear into insignificance.