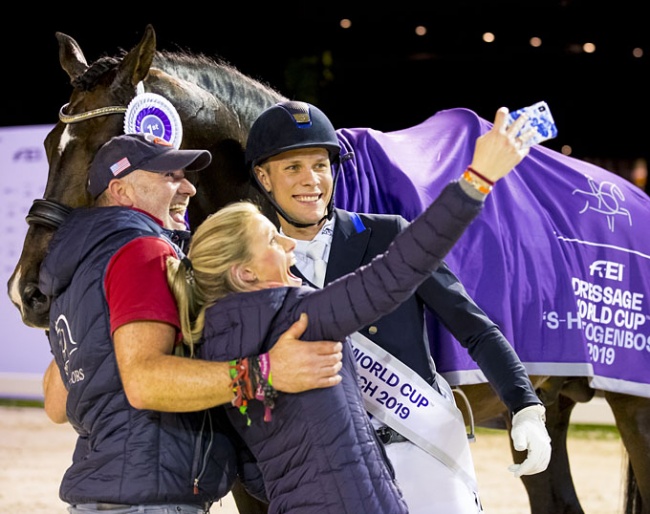 Denmark’s Daniel Bachmann Andersen (28) threw down the performance of a lifetime to win the edge-of-the-seat tenth and last leg of the Dressage World Cup™ 2018/2019 Western European League at ’s-Hertogenbosch in The Netherlands on 16 Match 2019.

Last to go, it seemed he had a mountain to climb to overtake the fantastic score of 84.875 posted by Helen Langehanenberg (36) who had just pushed her German compatriot, and reigning series champion, Isabell Werth, off the top of the leaderboard.

But the Danish rider and his 14-year-old stallion, who began the season with a brilliant victory on home ground last October in Herning (DEN) where they also left Langehanenberg and Damsey FRH in their wake, really pulled out all the stops to do it once again. Their winning margin was tiny, just 0.015, but their mark of 84.890 rocketed them into pole position on the day and into fourth in the final standings on the Western European League table.

On an afternoon of sparkling sport there was plenty to keep the Dutch crowd pleased, with both Anne Meulendijks (MDH Avanti NOP) and Emmelie Scholtens (Apache) giving a great account of themselves before Hans Peter Minderhoud took the lead with Glock’s Dream Boy when posting a score of 81.635. However, third-last to go, World No. 1 Isabell Werth put 82.930 on the board to go out in front, and that was the target Langehanenberg was chasing when next into the ring.

And the lady who was crowned 2013 FEI Dressage World Cup™ champion was on fire, Damsey completely composed and concentrated as they forged way into the lead. The smile on her face as she punched the air after the final halt said it all. “This was the best test we’ve ever done!” Langehanenberg pointed out. But Bachmann Andersen wasn’t going to be intimidated. “I saw Helen’s score just before I went in and I decided I was just going to go for it - and I did!” he said.

And Zack answered his every call, demonstrating his ever-growing confidence and immense ability. He’s an extraordinary horse, because he lost an eye due to an injury when he was six years old, but it certainly doesn’t hold him back. “He’s well used to it and he knows his job and he believes in me - but he is truly amazing!” the Danish rider said of his 15-year-old stallion.

"Today he just rocked it and it felt so good, he has so much power and now he can really absorb the degree of difficulty in this Freestyle. We finished very close Helen and I, and it’s amazing to ride against these great German and Dutch riders who are bringing out their ‘A’ game. This is another really important moment in my career," said Daniel Bachmann Andersen (DEN)

Now he’s really looking forward to the FEI Dressage World Cup™ Final in Gothenburg (SWE) which kicks off on 3 April. His strong league result will ensure a good place in the drawn order, and he can’t wait to take on the best of the rest when the moment comes. “Zack will have a little rest now and I will slowly build him up for Gothenburg. I know what the Swedish crowd will be like, it will be electric, but that only makes him better!” he pointed out.

There are nine spots at the Final available to riders from the Western European League and, as it stands this evening, Germany’s Langhanenberg and Dorothee Schneider will join their fellow-countrywoman and defending champion Isabell Werth when the action begins. But despite finishing third, eighth and tenth respectively on the WEL League table, Germany’s Benjamin Werndl, Frederic Wandres and Fabienne Muller-Lutkemeier will miss out because only three riders from each National Federation are permitted to compete.