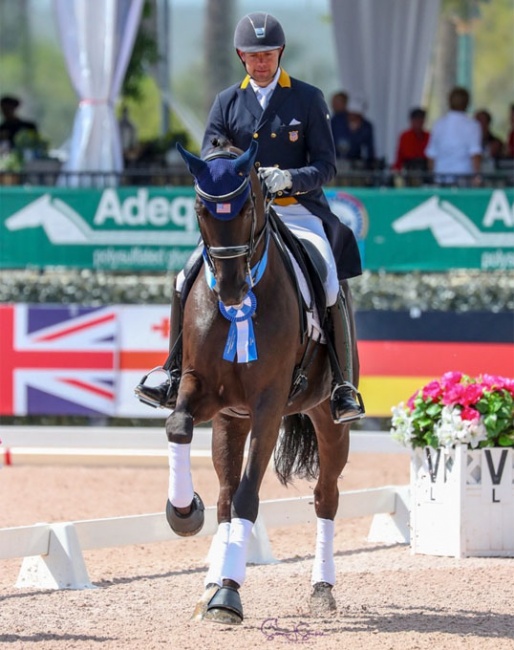 “I was just starting my career in Florida and was in Europe looking for horses when I tried him out,” Endel Ots said. “He had three really good gaits and it felt like we made a real connection. So I called my dad and said, I know he’s not what we’re looking for, but this horse is a really interesting prospect. And he’s been super ever since.”

“These have been his first CDI wins on a Small Tour. I am very happy with both. He was nice and clean in the Prix St George, super relaxed and forward, and the highlight was his trot work,” Ots said. “And he stayed with me super well in the canter pirouettes.”

Staying together is exactly what these rising stars have planned, including more CDI competition at AGDF 10 and AGDF 12, and charting an even greater international course this summer. The USDF Bronze, Silver and Gold medalist says he’d like to qualify with Lucky Strike to represent the United States on its Pan American Games team. It’s not an unreasonable aspiration. In 2011, Ots was named alternate for the US Pan American Games Dressage team.

“With each CDI we figure out a little more about one another, what works in our warm-ups, how to manage our partnership on a Small Tour. I’m confident about his abilities and where we are going.”

Ots’ confidence in his horse has been boosted by the opinions of his sport’s judges (who are simply horsemen, too), including an impromptu compliment about his apparent system for success: “Probably the nicest thing I’ve been told is how happy it makes judges to see a horse enter at the Young Horse program and move up as well as Lucky Strike has through the levels.”

Lucky Strike’s rising star in the international dressage world has continued to do this father-and-son-team proud. Last summer the pair qualified for the US Championships in the number one spot with an average score of 76.103%. Before that, Ots and their “super” horse won Reserve in the Developing Horse PSG at the 2017 Markel/USEF Young & Developing Horse Grand Prix National Championships, won the Six Year Old Markel Young Horse Championships, and were 11th in the nation in the Five Year Old division of the 2015 World Young Horse Championships.

Could Lucky Strike be the next to spark the imagination of the American dressage world? His owners – and judges – think so.

Learn how Endel Ots can help you and your horses earn the scores and compliments you deserve together at www.endelotsdressage.com.