Photo Report: Double Win for Fry and Everdale in U25 Division at 2019 CDI Lier 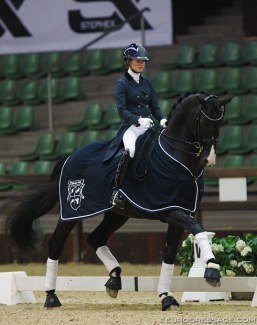 Charlotte Fry, the 2018 European Under 25 Champion, has taken the KWPN licensed stallion Everdale out for his international Grand Prix debut in the U25 division at the 2019 CDI Lier on 28 February - 3 March 2019.

The Lier Under 25 division had a small field of six riders, several of them who have gone up the levels from ponies to junior and young riders and now Grand Prix.

In the Short Grand Prix the powerful black stallion showed much bounce in the passage, but in the piaffe he could sit more behind and have more liftt in the withers, yet the rhythm was there. The extended walk had one hoof overtrack. The pirouette left was small but a bit flat, the right one much better. Everdale made big changes in both tempi diagonals. They scored 71.436% for the victory and went on the get a second trophy for their 75.260% earning freestyle ride.

"Everdale was amazing," Fry told Eurodressage. "I was really happy with him. He gave a great feeling in both tests and they were so fun to ride. He is not really experienced in the U25 tests yet, but his character in the ring is top. He is so willing to please and does everything I ask! It was also his first ever u25 freestyle and we both enjoyed every second of it! When he's more confident in the work and the test I think he's going to be really amazing!"

Everdale comes across as a very powerful stallion with Fry cleverly keeping his attention focused on her instead of the surroundings.

"In the first test in Lier, he just felt really excited to be showing off again at such a big show and he does have so much power and energy, but he just gave the feeling he was really happy to be competing at Lier," Fry explained.

Fry has been competing Everdale internationally for the past two years, starting at young riders level in June 2017. In 2018 they did only one CDI in 's Hertogenbosch in March. Lier was their CDI come back exactly one year later.

"We've been doing national shows in Holland since Den Bosch making the transition to U25," Fry explained. "He is so talented for the Grand Prix work so he has learnt really fast. In May he did his Inter 2 debut and had 77%, and he's competed in several national U25 grand prixs between 70 and 75% since then!"

Dutch Thalia Rockx has proven herself to be a renaissance young lady competing at young horse, junior and young riders level in 2018, has now added international Under 25 Grand Prix level to her programme. Aboard her father's home bred 17-year old Dutch warmblood Verdi de la Fazenda (by Florett As x Sandro Hit) she twice finished second in Lier. The combination scored 68.128% in the Short Grand Prix and 72.210% in the Kur to Music.

American born Belgian Alexa Fairchild made her long-awaited come back to the ring after a three-year break from CDI competition. Fairchild's last show was the CDI Roosendaal in March 2016 with her U25 schoolmaster Vanita (by Jazz). The Belgian rider then switched trainers, moving to Anky van Grunsven's yard with her horses. A return to the international arena was interrupted because of the major overhaul of her riding at Van Grunsven's. Furthermore, Vanita was operated on for colic at the time. Not finding her stride in Holland, Alexa returned to Belgium and moved to Wim Verwimp and Fanny Verliefden's yard to get back on track.  Alexa has now returned aboard the 13-year old Hanoverian mare Romy (by Rousseau x Rotspon) and twice placed third at the CDI Lier, scoring 64.538% in the Short Grand Prix and 68.095% in the Kur to Music.

Text and Photos © Astrid Appels - NO REPRODUCTION ALLOWED WITHOUT PERMISSION. Email us if you are interested in photos.