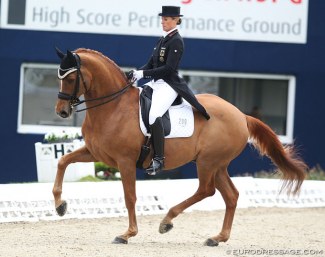 German Grand Prix rider Bernadette Brune has given the ride on her second Grand Prix horse, Lights of Londonderry, to the French former Under 25 rider Charlotte Chalvignac-Vesin.

In July 2015, Brune acquired Lights of Londonderry after the horse had represented France at the 2014 World Equestrian Games in Caen under Alexandre Ayache. Brune hoped to have a successor for her top ride Spirit of the Age OLD, but the chestnut struggled with an injury and was never able to score more than Spirit.

Brune and Lights of Londonderry made a successful CDI Debut at the 2016 CDI Nice, went on to get good scores at the CDI Stadl Paura that year and also competed at Hagen and Hamburg. After that the gelding sustained an injury and took more than a year to recover. Brune brought him back in 2018 and showed him at the CDI's in Herning, Hagen and Aachen.

"Lights being to old to achieve a descent price and not having the percentages (more than 71%) to get a place in the German team, I decided to give an upcoming rider a chance to be successful with him," Brune told Eurodressage.

Lights of Londonderry moves back to the south of France near Geneva, which is almost like a home coming as he has returned to where his sport career started.

Alexandre Ayache and Jean Francois Vesin were long-time collaborators and horse dealers and have known Lights since he was a youngster. Charlotte Chalvignac's husband Jean Francois Vesin steered the chestnut to a bronze medal at the 2010 French Young Horse Championships in the 6-year old division, after which Ayache took over the ride for FEI level. He competed the horse at international Grand Prix level in 2014 and 2015 with the 2014 WEG in Caen as career highlight.

Charlotte Chalvignac will now take over the ride.  The 28-year old has competed at a modest number of CDI's last year, presenting Dvina (by Don Frederico x Laurentianer) in the medium tour.

"Charlotte is a very nice and sensitive rider," said Brune. "They know the horse very well and they take very good care of the horses. So for me it was the ideal place to send the horse to. I want to concentrate on the future and prepare Gunner for the Grand Prix."

In an interview with DressProd, Chalvignac stated that "Bernadette called Jean to ask if we were interested in taking on Lights because since a year we have been doing business together. The idea is to keep Lights till the end of his career and give him a retirement here at home. Our only objective is to have fun and to try to be as good as possible. We are extremely grateful to Bernadette for her trust because it's thanks to her that we have recovered this horse which has meant so much to us."