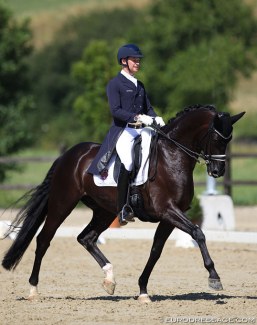 Matthias Alexander Rath's small tour mount Beaulieu has moved to The Netherlands to be sold. Diederik van Silfhout has secured the ride on the 10-year old Oldenburg licensed stallion.

Bred by Paul Schockemöhle at Gestut Lewitz, Beaulieu is by Bentley out of Sensation (by Sandro Hit x Wesley).

He was licensed at the Mecklenburger licensing in December 2012 and did his 30-day performance test in Schlieckau in 2012, where he scored 7.08 for jumping and 7.38 for dressage to finish on a total of 7.41

The black was first trained by Anja Engelbart in 2013 and sold as a 5-year old to Ann-Kathrin Linsenhoff as future hopeful for Matthias Rath. They made their show debut at A-level in 2014. In 2015 Carolin Brandt competed him whereas Rath only returned to the show ring three years later at small tour level in 2017. Rath and Beaulieu competed at the 2017 CDI Le Mans, the 2018 CDI Wiener Neustadt, where they won, and at the 2018 CDI Leudelange in Luxembourg - their last show together - where they finished 5th in the Prix St Georges (68.824%) and ninth in the Intermediaire I (67.235%).

Van Silfhout has now taken on the ride temporarily and made his show debut on Beaulieu at the regional competition in Voorthuizen, The Netherlands. They won the Intermediaire II with 68,68%.

In the autumn of 2018 Rath began competing his top horse Foundation (by Fidertanz x De Vito) at Grand Prix level. He also has the now 6-year old Destacado, with whom he won silver at the 2018 World Young Horse Championships, in the wings.