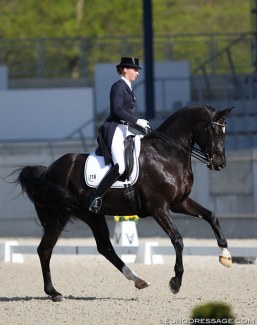 Isabell Werth has two new Grand Prix horse to ride - Fiero and Quantaz - and she has immediately taken them into the winner's circle at the 2019 CDN Ankum on Thursday 21 February 2019.

In today's Grand Prix class in Ankum, Werth scored 74.867% for the victory on the 9-year old Brandenburger bred Quantaz (by Quaterback x Hohenstein).

Quantaz  is owned by Victoria Max-Theurer, who has been training with Werth for the past year. The horse is bred by Kathrin Damm, was previously owned by Andreas Damm and ridden by Ronald Lüders. He had his last ride on the horse in the spring of 2018.

Betz' Fiero has moved to Werth's stables to be sold. The past four years the horse was trained and competed by Fabienne Lutkemeier and the pair competed in just four CDI's in that time period. She made her CDI show debut on Fiero at small tour level at the CDI Odense in October 2014. In 2016 they moved to Grand Prix level and they did one CDI in Darmstadt as well as placed 9th in the German Developing GP Horse Championship (Louisdor Cup Finals). In 2017 they rode at the CDI Hamburg and in 2018 they did the Grand Prix at the April CDI in Aachen. Their last show together was a national one in July 2018.

Further interesting pairs in the class including German B-squad rider Bernadette Brune who is working her way back on Spirit of the Age OLD after the stallion had time off to recover from a lung issue. The pair was sixth with 71.000%.

Portuguese Maria Caetano is preparing her rising star Fenix do Tineo, a 9-year old purebred Lusitano by Rubi AR, for the Grand Prix tour. The pair placed 10th with 68.267%. In 2018 the pair competed at international medium tour level. They are based at Hof Kasselmann in Hagen and work with Ton de Ridder.