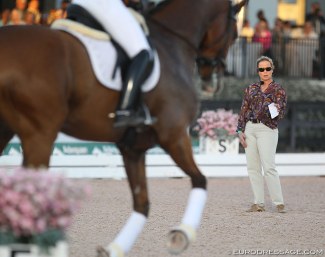 The fifth week of the Global Dressage Festival circuit in Wellington, Florida, hosted the famous CDI 5* on 7 - 11 February. In principle one of the most stellar weeks of the entire American Dressage circuit, enthusiasts of equestrian ballet - unconditional fans - gathered on 7 February for a bigger highlight than the actual competition: a masterclass  with the number one in the world: Isabell Werth.

The international stadium of the Global Dressage Festival did not have an empty seat and was crowded with dressage lovers. Both VIP tents were packed. In an atmosphere of wisdom and learning, the beautiful sunset got sidelined.

In the same line as Carl Hester's clinic last year, a total of six combinations were selected. From 5:30 p.m. until 9:00 p.m., for three and a half hours, Isabell taught six clinics, each one approximately 40-45 minutes. The first clinic started with a young horse and continued in crescendo as they reached Grand Prix level.

Over the years Isabell has proved her worth and value in dressage, and somehow has developed her own magical formula and equitation. In some way or another at the clinic on Thursday, Isabell Werth explained certain ingredients of her magical recipe. It turns out that all the advice she gave is something that we are all capable of doing.

What was magical was the speed with which she solved the little problems of the six riders that participated. In a few words, Queen Werth focused on the basics!

Ann-Marie Hosbond and Flashdance: "Make the outside rein your friend"

The clinic began with the youngest horse: a dreamy 5-year-old Westfalian Flashback (by Feedback x Lissabon) with fabulous gaits. Throughout the training session, Isabell started with the basics. Spectators were able to observe and learn about the qualities that a young horse must have to become a potential Grand Prix horse.

In the session, Isabell stressed the requirements for a young horse: "We are looking for a superior walk, a superior trot, a superior canter."

Likewise, she also emphasized the complete package of any dressage horse. "The entire package is rideability, elasticity and a good mind,” Werth explained. “When you have the whole package with a focused and motivated horse that enjoys his work, you have the best chance of developing a Grand Prix horse.”

In the warm up, Helgstrand Dressage rider Anne Marie Hosbond worked on the engagement of the hindleg to develop a better canter. The Danish rider challenged her horse in order to use the top line and actively use its hind legs to cover more ground. For this, one of the exercises the combination practiced were the transitions. This exercise encouraged Flashdance to start using its hindlegs in a positive way. At first the horse was presented with a short neck and a very tight contact, but after executing the transitions the horse had more freedom in the shoulders and was using his back. In other words, the more advanced and open the contact was, the more ability  there was for it  to open the shoulder, and have more fluidity through his entire body. He became smoother in the use of the hindleg.

Isabell stressed: “In the canter, an important thing is outside rein. Think freer and more forward with the inside hind leg. Use counter flexion to help him open him,” Werth recommended. “Always use big circles and bending lines. Once you have a long jump in the canter, you can start to bring him back a little more but still allow the swing over the back from the hind.”

Continuing, Werth highlighted the importance of the shoulder- in. " When you stay in shoulder-in, the contact has to be a bit longer so he has to come more forward. The key to this is that it needs to be relaxing,” she said at the end. "The rider's only mistake is to make it worse.”

The next rider was Lauren Sprieser of Marschall, Virginia, riding the 8-year old KWPN bred Guernsey Elvis (by Querly Elvis x Zadok). Throughout the 45 minutes session, Werth insisted on the fact that you have to always find a good rhythm to perform the movements. One of the exercises that she conscientiously applied was the shoulder-in.

"Shoulder-in brings the horse in front of you with correct flexion and also is a good preparation for half passes,” said Werth. "Using the shoulder-in with some transitions can also improve elasticity. Just be sure that you don’t let him run into the shoulder-in. To maintain the cadence, you can perform mini transitions during the exercise with half-halts."

Later, they worked on lateral exercises. Her golden words for Lauren made a huge change, the horse went from a flat trot, to a super elastic and expressive trot.

"You have to start little by little with the transition and then you can start the improvement of the swinging. It is very important to start slowly with flexion and balance. Then, when you feel good about that, you can start adding the swing with your inside leg, otherwise, they get blocked with the inside leg. Their hind legs have to follow the front legs, not the opposite. Then you can really celebrate with a nice half pass," said Werth.

In order to increase flexibility, Werth noted: "Do more basic work to improve flexibility," she said. "It gives you more possibilities." Once in the canter, they worked to improve the expression and the jump. Werth emphasized that half-halts in canter are really important to regulate the rhythm.

The last exercise they worked on were the pirouettes, for which the main secret is based on "preparation."

“The hindlegs follow the front legs; the front legs do not follow the hind legs If you do not control the jump, first correct it and then enter your exercise," Werth said. "When you're in the corner: first outside rein and then inner leg. Do not use the inside rein "

In the middle of the pirouettes, Werth encouraged Sprieser to be softer with the inside rein so the horse was more relaxed in contact and thus not blocking their rear.

"When you go through the corner - outside rein, inside leg. Do not use inside rein. Then you can start in the half pass. Do not lose the jump. Flex him to the outside if he gets a bit too short behind," she said.  "The secret is not the pirouette, it's the previous preparation. Can you bring him back on the spot? Can you control the hind leg and the jump? If you can feel these, you can control the pirouette. Don’t always ride a small pirouette in training, train the collection. Keep him in front of you on your seat”

The Dominican Republic rider Yvonne Losos de Muniz was the third rider to go and to receive valuable advice from the queen of dressage.

Riding her new diamond, the very explosive 9-year-old KWPN mare Felicia (by Vivaldi x Polansky), Yvonne handled a very tense mare from the first stride. The first exercises they worked on were relaxation and rhythm.

Werth tols De Muñiz to shorten her reins and keep the pace as smooth as possible, which gave Felicia the confidence to make a big circle in walk. She also told her to do shoulder-in, working on flexion as a method to combat the tension and stiffness.

As the mare started piaffing from tension, Isabell suggested: "You have to give the mare confidence. Keep the inside leg and keep a clear walk, uncomplicated walk, when is really clear, ask for two steps and that’s it. She must piaffe when you ask her, not when she is tense," said Werth. "She needs to learn to wait for you with less trotting."

Werth reminded her to think about keeping the horse in front of her leg on each stride. Felicia always showed a lot of willingness to work, big motivation. Therefore, Isabell told Yvonne that she always needs to keep focusing her attention and keep her busy by riding circles, voltes, diagonals, change lead, new circles.

The mare itself proved to have a lot of potential. Werth made it very clear that it is always essential that she is concentrated on the rider. All kinds of exercises, including transitions, allow the horse to channel the talent in the right way. Werth insisted on the fact that you have to change the patterns of movements, not always perform the same patterns, so the horse always listens to you and does not fall into monotony.

Benjamin Albright's 11-year-old Westfaliann gelding Falstaff (by Furst Piccolo x Fruhlingsball) had the tendency to stop both in the trot and in the canter. At that moment, Werth reminded the rider that his seat was the key point to control the overtrack of the stride.

"Use the inside leg, but do not interrupt it with the reins," he said. "When you shorten your reins, the horse begins to pick up from the front; you want him to do it from the back end. "

Olympic Canadian rider Jacqueline Brooks and her 12-year-old Hanoverian gelding Westwood (Wolkenstein II x Lauries Crusador xx) were the penultimate combination. During their session they worked on the relationship and how to improve fluidity.

One of the great quotes that Isabell couldn’t stop saying throughout the night was the interesting expression "Educate your reins". The use of the reins was one of the great sins which Werth concentrated on with several riders. In general, Isabell emphasized the fact that the outside rein must be your friend. With hot horses, Werth reminded that the use of the hand was not going to solve the problem. "If you close the door with your hands first, the horse ends up fighting."

Isabell with her golden words, explained that first they have to correct with the legs and seat, and then with the contact. The results were immediate, the horses shifted instantly.

With Jacqueline they worked on the rhythm in the passage. For this, Werth insisted on making transitions during the execution of the exercise. For these transitions, the Olympic rider stressed that the external rein and contact were key. "Sit independent of your reins"

As last to go, Austin Webster rode the Oldenburg 9-year-old Abacrombie TF (by Abacus x Idocus). As Annan Hepner, journalist of PS Dressage reported, “the popular Disney soundtrack from Frozen, “Let it GO", could perfectly define Werth's recommendation, since the rider was constantly limiting the movement of the horse with his hands (short neck and very tight)”.

"Let it go, the horse needs to breathe; he needs to calm down, " Werth reiterated. "There is a thin line between enough and too much, he has to relax, and you need to feel the horse and at this moment with the rhythm you want to escape, he cannot stand, that's why he runs and it seems he is going to explode ... It's very important that the horse is independent of your reins because he pulls and runs more. Sit in your seat and let it go forward," said Werth. "Let it go, stop interrupting it with the reins, close your knee and sit with a firm seat, use the lower part of your leg and do not shorten the reins, let him fly with you and do not stop the movement with your reins."

Werth kept repeating her recommendations: "You have to feel it with your seat". "If your seat is very heavy, the horse will make a stronger and heavier stride, the opposite of what you are looking for. If the horse goes comfortable, it will go slower. "

Isabell Werth, an internationally renowned rider, whose know-how and expertise on dressage is infinite, shared great tips with the the audience. For three and a half hours, the spectators remained faithful to their seats in order to acquire the Queen's magic potion. The atmosphere was electrifying, as the wisdom of the great Isabell Werth captivated everyone with her advice. She helped six riders from grassroots basics to more technical advice in a masterful way.