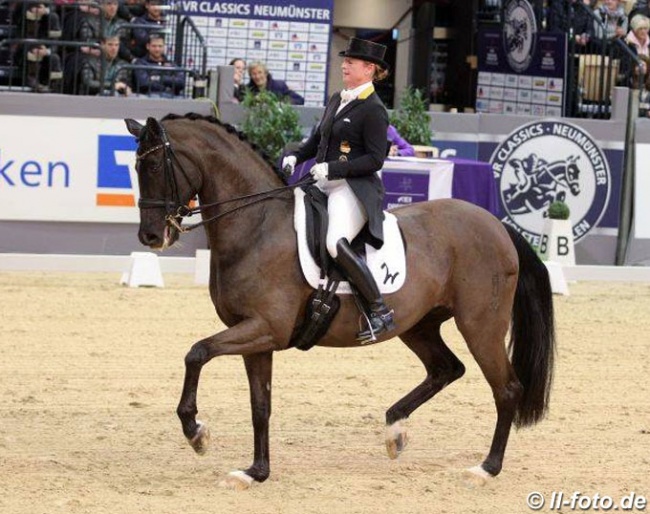 Isabell Werth and Weihegold OLD scored an easy win in the Grand Prix for Kur at the penultimate Western European League World Cup qualifier in Neumunster, Germany, on Saturday 16 February 2019.

Werth's quick trip to Wellington, Florida, to teach a masterclass on 7 February 2019, did not hinder the training and preparation of Weihegold for Neumunster. The 14-year old Oldenburg mare (by Don Schufro x Sandro Hit) looked on point and produced her best performance so far this winter.

Scoring a whopping 82.565% from a panel of judges of which several members often sit together on the ground jury at numerous shows - Umbach, Matthiesen, Eisenhardt, Wüst, and Almasy - Werth showed she was once again a league of her own. The German number one truly excels at getting the most out of a horse, which is average in her gaits. Today in Neumunster, Werth had Christine Arns-Krogman's black mare on fire but in good relaxation and they showed amazing rhythm in piaffe and passage. Overall one wishes to see Weihegold lower the croup much more and not hollow the back, but there were many lovely things in their Grand Prix ride.

The first trot extension was sweet with better overtrack than usual for Weihegold's limited trot. The half pass to the right could have been a bit more swinging, the one to the left was smoother. The second and third extension were conservative. The passage work was very elegant and electric, the piaffes went well and on the spot though she sometimes showed some back-stepping tendency. The transitions are flawless. The extended walk had two hooves overstep and good relaxation, but there wasn't the greatest rhythm. The collected walk was very short and came close to being lateral after C. The transition into passage was effortless. The two tempi changes were good, but the rider swung much in the saddle. The extended canter was safe, the zig zag fluent, and the one tempi changes correct, but not that ground covering with the mare's shorter canter stride. The ones were finished shortly after x. The pirouettes were solid but there could have been a bit more bending and flexion in the ribcage in the right pirouette. The final passage was super: regular, lightfooted, off the ground and with a good piaffe at X.

Helen Langehanenberg and Louise Leatherdale's 17-year old Hanoverian stallion Damsey (by Dressage Royal x Ritual) landed second place with 76.413%, but the marks ranged from 74.891 to 78.043%. Damsey showed big trot extensions and good half passes, but he dragged his feet in the last rein back steps. The passage is powerful, off the ground and energetic but Damsey continuously throws in uneven steps, either snatching with that right hind, or double beats here and there, which reduces the overall quality of the movement. The piaffes are rhythmical but travelled too much forward. The extended walk was excellent, as well as the collected walk and extended canter. The zig zag could be more ground covering from side to side. The two tempi's were big, but one change did not come through in the ones. The left pirouette was well ridden, the right one way too big.

Ireland's Judy Reynolds and Joe and Kathleen Reynolds' 17-year old KWPN gelding Vancouver K (by Jazz x Ferro) are climbing their way back on the ladder. After the horse was out for an injury, their scores had dropped on their return to the show ring, but the duo is working their way up again and in Neumunster, they posted 75.109% for a third place. The result marks the first time in history that an Irish rider has finished in the top three at a CDI-W in Europe.  Vancouver K almost broke into canter in the first trot extension. The right half pass was lovely but in the left one the hindquarters trailed.  The passage had much airtime and was elegant, but in piaffe the horse appeared tense and insecure despite achieving good sit. The extended walk had two hooves overstep and was well regulated, in the collected he kept a clear rhythm. In the second piaffe the horse took a forward step and executed the movement in two phases. The two tempi changes were straight, the extended canter was uphill and powerful but the nose needed to come more out. The zig zag was well ridden, the one tempi changes went well. The pirouettes were small but the rider steered much with the hands on long reins. Vancouver's mouth could be more closed and quiet in several movements. The final trot extension got quick in the tempo, but the final passage was scopey with a good piaffe on the spot, even though the transition out needed to be more fluent.  Dorothee Schneider and Matthias Herbert's 13-year old Bavarian Sammy Davis Jr (by San Remo x Wenckstern) landed fourth place with 75.065%. The long legged black gelding was not entirely rhythmical in his trot extensions and half pass right, but Schneider masterly steered the horse through the movements in a soft bridle contact. The extended walk had sufficient overstep but the rhythm was mediocre. The collected walk was short but Schneider kept it well in the four beat rhythm. Sammy Davis' piaffes have good rhythm, but are on the forehand with the hindlegs more hopping on the spot and the croup remaining high. One wishes for more sit and lift in the withers. In the passage he has much suspension, but the hindlegs need to be more under. This is typical for Sandro Hit offspring: they pull up the hocks, but do not really move the hindlegs under, towards the point of gravity. The pair scored points on the canter work in which the horse is always uphill oriented: the two tempi changes were nice, the extension lovely despite an early change, the zig zag was smooth. Unfortunately Sammy Davis missed a change in the ones due to a sneeze, and the exit of the left pirouette was rather big, but the right pirouette was small. Benjamin Werndl and Flora Keller's 15-year old Westfalian gelding Daily Mirror (by Damon Hill x Florestan) slotted in fifth with 74.848%. In the trot extensions the horse achieved good ground cover, but the half pass to the right needed to be more regular in the rhythm, despite the good crossing. The first piaffe was a bit hesitant and crooked, and the gelding also struggled with the rhythm in the second and third one. In the passage one wishes to see more push from behind as Daily Mirror sometimes toe dragged the right hind a bit. The extended walk had very good ground cover and relaxation. The collected walk was correct. The two tempi changes were smooth, but could be a bit more straight and climbing for even higher scores. The extended canter was nice, the zig zag and one tempi changes secure. The left pirouette was too big, the right one much better. Daily still had good energy on the final centerline but the end halt was not immobile.