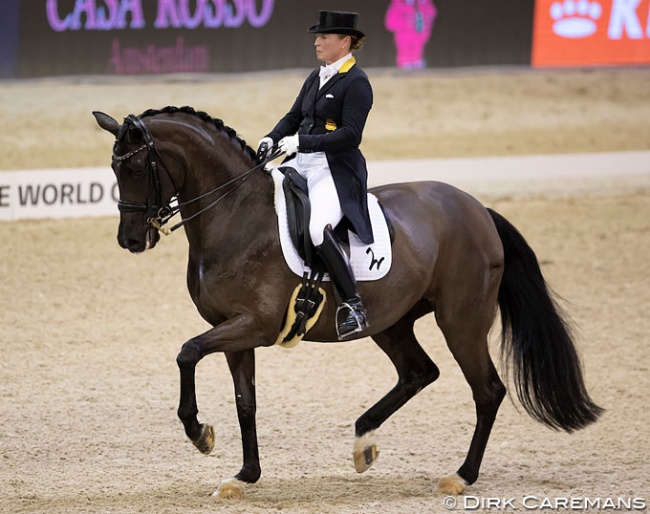 Isabell Werth and the world number one horse Weihegold won the first World Cup class of the new year at the 2019 CDI-W Amsterdam on Friday 25 January 2019.

Werth had her work cut out on Christine Arns-Krogman's 14-year old Oldenburg mare as the test did not go with the usual suave and smoothness known of the German master. The back Don Schufro x Sandro Hit mare looked a little ring rusty and the test was not faultfree but it also had its typical highlights. The lack of fluidity reflected little in the scores as the judges' panel consisting of Sanders (NED), Van Twist (NED), Baarup (DEN), Colliander (FIN), and Ringmark (SWE), rewarded the ride with 80.065%. Or did it? Maybe because the marks ranged from 76.196% to a whopping 83.152%, it says enough?

Werth and her black mare Weihegold began with normal trot extensions in which mare flicks her toes in front more and more. The half passes were correct, but not the scopiest.  The first passage was off the ground and engaged, but the exit from the first piaffe was a bit hesitant. Still there was very good energy and activity. The extended walk was mediocre: the rhythm poor and overtrack very limited, but Isabell keeps her horse well relaxed. In the collected walk Weihegold gets short. The second passage was very lightfooted but the rhythm got slightly disrupted by some sneezing. The canter strike off was short. There were several big mistakes in the two tempi changes, but the extended canter was good, yet the flying change early. Also the zig zag appeared quite laboured. The one tempi changes went well, but the mare was a bit croup high at the start. The pirouettes were small and correct and the third trot extension was the best one. Werth rounded off the ride with a superb passage-piaffe-passage on the final centerline, in which she kept Weihegold's nose nicely out.

Werth's team gold medal winning WEG mate Dorothee Schneider and Matthias Herbert's 13-year old Sammy Davis Jr (by San Remo x Wenckstern) landed second place with 76.217%. She had the judges more on the same wavelength. There was a break into canter in the second extended trot, but the half passes were well ridden. Overall today, Sammy Davis Jr was not ideally engaged and regular in the passage, but the rhythm in the piaffe was good. The extended walk had one and a half hoof overstep but not the best rhythm nor stretch over the back. The second piaffe was slightly forward. The two tempi changes needed some steering from the rider but there were no mistakes and the extended canter was good, the zig zag correct. Schneider rode nice, straight one tempi changes and produced a steady final line, even though the horse relied on his rider's mastery to carry him through.

Coming from a World Cup win at the 2018 CDI-W Mechelen at the end of December, Dutch Hans Peter Minderhoud and the 11-year old KWPN licensed stallion Dream Boy (by Vivaldi x Ferro) placed third in the Amsterdam Grand Prix with 75.652%. His marks went from 73.587% to 77.500%.  Dream Boy was very active in the extented trot but hollows his back. There was much ground cover in the half passes, yet the horse needed to stay more uphill in the frame. The passage was active and bouncy with much airtime, but the hindlegs need to move more under. The first piaffe was on the forehand and with the hocks high instead of under; also the left hind leg seemed to be moving away from the body. The extended walk was well regulated with good clarity of rhythm. The second piaffe was better in rhythm but again the hindlegs were not enough under the body.

The sympathetic black stallion produced big two tempi changes but was unbalanced and swinging in the hindquarters with the tail swooshing. A good, uphill extended canter followed by the nose needs to be more out. Dream Boy was tense in the zig zag with a restless tail, but there were no mistakes. There was a fault in the one tempi changes at the end after the changes were getting shorter to the right towards the end of the diagonal. The pirouettes were nice. The horse was still very eager and active on the final centerline, but the hind legs both in passage and piaffe needed to move more under.

Patrik Kittel and the 13-year old Delaunay (by Dr Doolittle x Feinbrand) landed fourth place with 75.435%. The bay was ridden in a much better frame, with more length in the neck but lacked some straightness in the body and uphill tendency throughout. German Helen Langehanenberg dropped to a 7th place on the 17-year old Damsey (by Dressage Royal x Ritual) on 74.109% after a mistake in the tempi changes and the passage was quite uneven today. Dutch Madeleine Witte-Vrees unfortunately got eliminated as the horse had blood on the fetlock.

The World Cup Freestyle to Music is on Saturday 26 January 2019.