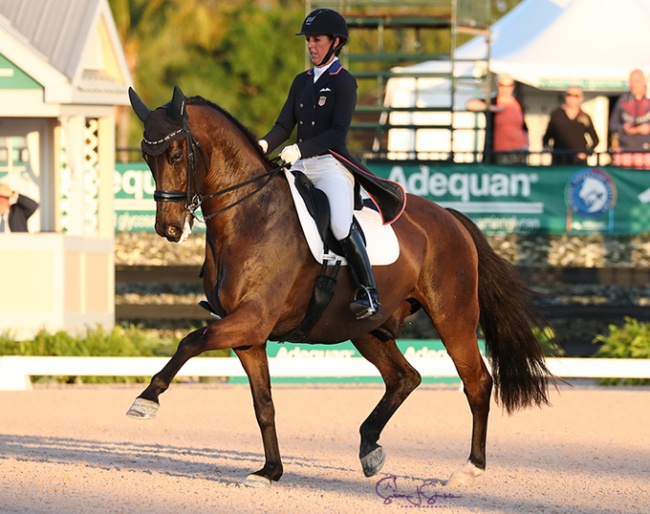 The three Florida based American WEG team riders determined the beating of the drum in the CDI-W Grand Prix class on Thursday 24 January 2019, the first of day of the third week of competition and the second of international competition at the Global Dressage Festival in Wellington.

“I’m not surprised because I know that this horse has a lot of potential, but coming out for your first show you always want to do well and start where you left off last year,” Perry-Glass said about her win on Thursday. “I felt like that test was better than I’ve ever felt him. The rideability was there, and his mental game was there. It just showed that he’s ready for this year.”

“I just kind of had a few little lightbulb moments with our riding. Even after being on an Olympic team and a WEG team, you still have those moments,” commented Perry-Glass on her ride. “We’re just going to keep continuing to grow and get the scores up, even by 0.5%, and just keep chasing the higher scores.”

Perry-Glass said of her relationship with Goerklintgaards Dublet, “I’m very close to him. He’s my baby. I’m around him all day. His care, I look after the smallest little things with him, and sometimes my vet gets annoyed and he’s like, ‘Kasey, he’s fine.’ But you know, the earlier you catch things, the earlier you can fix it. I take his care very seriously.”

Laura Graves (USA) and Verdades, her 17-year-old Dutch Warmblood gelding by Florett As, came in second with a score of 77.087%. Hiccups in the second piaffe and one tempi changes cost her the victory. Fellow 2018 teammate Adrienne Lyle (USA) and Salvino rounded out the top three with a score of 74.717%.