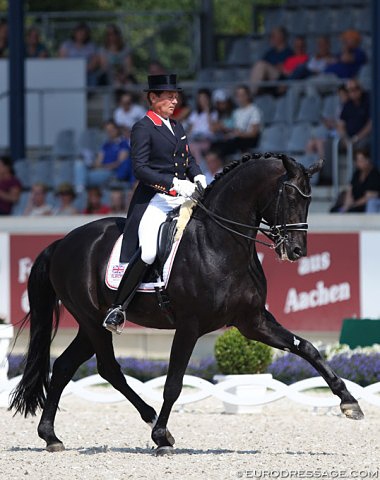 Delatio is by De Niro out of St. Pr. St. Rubina (by Rubinstein x Diplomat). He is bred by Ulrike and Reinhold Bosse.

The black was discovered as a foal by Bernhard Schaerffer, who acquired it as a price highlight at the Verden Foal Auction in 2004.

He was licensed for breeding with the Hanoverian society and won the 70-day performance test in Adelheidsdorf. Under Hannes Baumgart he qualified for the 2007 Bundeschampionate

In the winter of 2007-2008 Delatio sold to The Netherlands to Miranda Rongen and Dutch company Decor Son. Ulrich Kasselmann later on bought Delatio in Holland and sold it to his Russian client Elena Knyaginicheva.

The stallion returned to the show ring at Grand Prix level under Bianca Kasselmann in the spring of 2017. However, it was under British Emile Faurie that the stallion reached its full potential as an international Grand Prix horse. The pair won the 2017 Hamburg Dressage Derby and the horse achieved its first stellar score at the 2017 World Cup Qualifier in London, where they finished second cracking the 80% for the first time with 80.405%. They qualified for the 2018 World Cup Finals in Paris, but a small injury right before the show kept them home.

After Faurie opted to ride his other Grand Prix horse Dono di Maggio on the bronze medal winning British team at the 2018 World Equestrian Games in Tryon, Delatio moved to Patrik Kittel's yard to be sold.  Kittel also achieved 80% Kur scores on the talented stallion at the World Cup qualifiers in Lyon and Salzburg.

Ridehesten reported that Delatio has now been sold to Malaysian Qabil Ambak, who trains with Dennis Fisker in Denmark. The pair aims to compete at the 2020 Olympic Games in Tokyo. Qabil Ambak was the silver medal winner at the 2018 Asian Games.