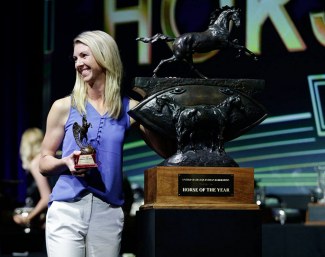 US Equestrian has announced that Verdades, owned by Laura Graves and Curt Maes, has been voted the 2018 International Horse of the Year.

Verdades (Florett As x Liwilarda/Goya), a 16-year-old Dutch Warmblood gelding, affectionately known as Diddy, began his journey to international success in 2014 after garnering attention from his reserve-champion finish at the U.S. Dressage Festival of Champions presented by The Dutta Corp. Since his launch into the spotlight with his life-long rider and trainer Graves, Verdades’s achievements and continued success are profound. In 2018, Verdades again proved why he is one of the best horses to grace the international dressage ring as he won the Grand Prix at the FEI World Cup™ Dressage Finals in Paris and helped the U.S. team earn a silver medal in the FEI Dressage Nations Cup™ Germany. He and Graves then rode for silver medal-winning The Dutta Corp. U.S. Dressage Team at the FEI World Equestrian Games™ (WEG) Tryon 2018.

With the home crowd in his periphery, Verdades also led Graves to an individual silver medal, the first silver medal awarded to a U.S. dressage combination at a global championship. Their 2018 success allowed them to reach the world number one position on the FEI World Individual Dressage Ranking List in October, marking the first time that a U.S. dressage combination has been ranked world number one.

"Thank you for recognizing my horse tonight because this is really what it is about," said Graves. "...this great horse brings joy to so many people. So it is Verdades tonight that we really have to say thank you to. It has been a great pleasure, it has been my pleasure to share him with the world."