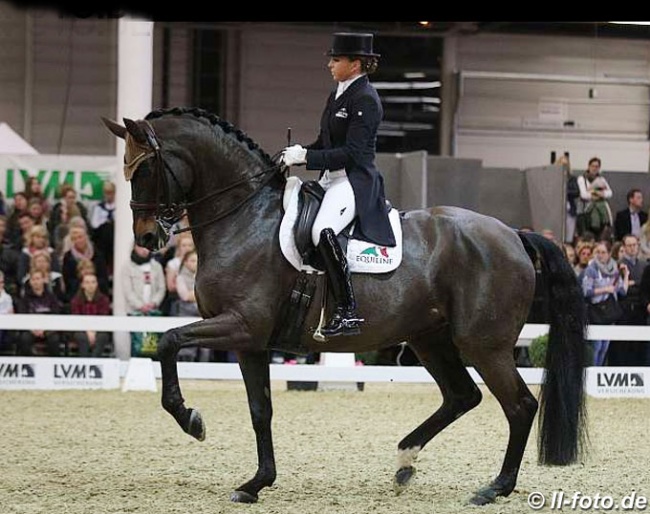 The annual national indoor competition in Munster, now Known as the K+K Cup but originally titled the Rolinck Cup, is the opening event of the new competition year. Even though this is just a national event, the CDN Munster Indoor is worth taking a look at as a big field of international riders make their debut there with either new horses, or they present their current mounts at a higher level.

Schneider and Wahlkamp-Nilsson Set the Tone

Grand Prix riders Dorothee Schneider and Malin Wahlkamp-Nilsson set the tone in the big tour at the 2019 CDN Munster that consisted of two rounds.

The Grand Prix was won by routinier Dorothee Schneider aboard the 15-year old Oldenburg bred Fohlenhod's Rock 'n Rose (by Rubin Royal x Feiner Stern). The multiple German team medalist steered the dark bay to a big 75.180% score for the victory and left all competition behind her. Anabel Balkenhol and the 12-year old Trakehner stallion Heuberger (by Imperio x Michelangelo) landed second place with 73.900%, while Ingrid Klimke and the 11-year old Hanoverian stallion Franziskus (by Fidertanz x Alabaster) were third on 73.540%.

In the Grand Prix Special, Swedish Malin Wahlkamp-Nilsson steered Masahiro Kosaka's 10-year old Dutch warmblood gelding Eddieni (by Johnson x Negro) to victory in the horse's first Special ever. Twelve riders opted to compete in the Special and Nilsson wielded the axe of power on the chestnut gelding after placing fifth in the Grand Prix with 71.320%. In the Special they scored 74.196% and edged out Schneider on Rock 'n Rose, who finished second on 73.902%. Helen Langehanenberg and her second Grand Prix, Gunther Fielmann's 11-year old Holsteiner mare Annabelle (by Conteur x Linaro), slotted in third with 73.490%. Annabelle made her international debut at Grand Prix level in October 2018 in Herning.

"The Grand Prix Special was not in the Messehalle like yesterday, but in the Munsterland arena," Schneider reported on Facebook. "It was an absoutele challenge for the high sensitive Rock 'n Rose, who did a super job there. The spectators sit on eye height and the arena is against the kick boards, which is not daily business for our dressage horses. Despite all these new things and electric atmosphere, Rock n Rose was super focused and finished second."

Wahlkamp-Nilsson was thrilled with Eddieni in Munster. "I was super happy with him," she told Eurodressage. "It feels fantastic that he does so well even with some mistakes. He loves to work and he has an amazing mentality. Now we need to practice the strength and to get him more balanced and for us to get to know each other even more at this level."

Nilsson works at Patrik Kittel's yard and focuses on training the sales horses. Fortunately for her, the Japanese owned Eddieni is not for sale. "We are planning to do Joosland as the next show and then we go from there," said Malin. "I am really happy I am allowed to compete him and is enjoying every ride!"

In the small S3* Short Grand Prix the next day, Christian Gesing steered the 12-year old Westfalian mare Dynastie (by Damon Hill x Florestan) into the winner's circle on 66.798%, while Balkenhol and Crystal Friendship were second with 66.096%.

In another S 3* class, former German young rider team member Alexa Westendarp rode her talented 12-year old Hanoverian Der Prinz (by Diamond Hit x Davignon) to the blue ribbon on an impressive 72.171%. Westendarp is currently working as an assistant trainer at Hof Kasselmann and has shown much progress on both her own horses, Der Prinz and the small tour horse Four Seasons.

In another Short Grand Prix class, Balkenhol was back on song and this time with the 12-year old Hanoverian Davinia La Douce (by Don Frederico x A Jungle Prince). In a class of 17 combinations they topped the board with 69.698% ahead of Annabel Frenzen on her father Achim's 12-year old Rhinelander Leolox (by Lord Loxley x Limited Edition). They were second with 69.047%.

Finally one of the last classes of the weekend was the Grand Prix Kur to Music and German Under 25 rider Anna Abbelen booked her first big victory on Grand Prix schoolmaster Henny Hennessy, a 16-year old Hanoverian by Hofrat x Achenbach. They scored 74.88% for the trophy. Helen Langehanenberg's assistant trainer Sabrina Gessmann was on Abbelen's heels and placed second with Ella Delaney's 12-year old Holsteiner Cuantano SL (by Con Sherry x Alcatraz) on a score of 74.22%.