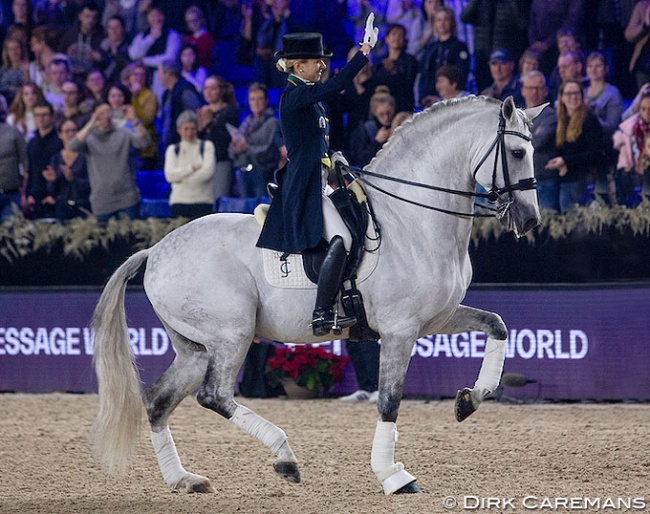 At the 2018 CDI-W Mechelen on 28 December 2018, Portuguese duo Maria Caetano and the grey Lusitano stallion Coroado wrote history for the Lusitano breed by becoming the first pair ever to crack the magical 80% barrier in a Kur to Music.

The previous kur record achieved by a Lusitano horse was set by Claudio Castilla Ruiz' Alcaide just a month ago at the 2018 CDI-W Madrid, where the pair scored 78,915% in the freestyle. Before Alcaide the record was retained for six years by Coroado's sire Rubi AR, who posted 78.150% in the kur at the 2012 CDI Vilamoura in Portugal.

At the World Cup qualifier in Mechelen, Caetano and the 11-year old Coroado (by Rubi AR x Xaquiro) were on peak form at the end of the 2018 show season. They posted 71.543% in the Grand Prix to place fourth and went on the notch 80.160% and a third place in the Kur to Music.

"Coroado gave me an incredible feeling in Mechelen, both competition days," Maria Caetano told Eurodressage. "He was happy to perform, waiting for all my aids, powerful and at the same time, relaxed! In the Kur he felt the crowd in the audience and it gave him even more willingness to show his best."

Caetano rode to Pirates of the Caribbean music, a theme often used for freestyles, but for Maria it has special meaning.

"I chose it as an homage to my former GP horse Util that passed away some days before the WEG in Kentucky in 2010," said Maria. "I use to have this music with him and then I thought that Coroado could be the right horse to “dance” the same soundtrack and keep Util in our memory. It is a composition made by my close friend Rui Pedro Godinho."

Coroado is bred by Coudelaria de Alter and owned by Juan Manuel Cordeiro.

Maria has been training with her father Paulo for years, but last year sought more intensive guidance from Dutch trainer Ton de Ridder alongside her father's eyes on the ground. She also decided to move to Germany to be more centrally located in the dressage world

"I am based in Germany since last May. In the beginning I was in Krefeld training at my good friend Irina Zakhrabekova’s stables. And after the WEG I moved to Hagen to Hof Kasselmann’s stables where I have now my horses and also ride some of Hof Kasselmann’s horses. Ton de Ridder helps my training in a weekly base, as well as in competitions. I still also have the help of my father as much as he can travel to Germany," Maria explained.

Maria believes the horse has made good progress since the 2018 World Equestrian Games in Tryon in September.

"At the WEG I felt that Coroado was in a top condition and that was still more to come," she said. "So I decided to stay in Germany to do the World Cup Qualifiers and show Coroado a bit more in the big stages of dressage. Since the WEG he has developed more strength in the body and is now reaching a very good physical and psychological condition to compete at high level. I feel he still have a lot to give. He is now 11 years old, a perfect age to keep improving the next years."

When asked if training and competing a Lusitano brings about specific challenges or advantages, Maria replied, "I  think that a good horse is a good horse, no matter the breed he is. Of course it is more meaningful to me to achieve this results with a Lusitano. Their “warrior” mind and willingness to be always in the side of the rider, the natural charm and the ability to collected movements are the great advantages of the Lusitanos. The challenge for the Lusitano breed is to keep improving the body strength of the horses and to seek for more sportive and athletic horses that, together with the Lusitano charm and character can make a great dressage horse."