Interviews
End of the Year Questions 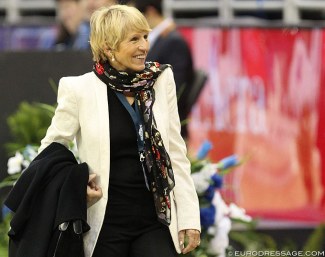 Between Christmas and New Year, Eurodressage used to feature an interview series called "End of the Year Questions". We asked some stand-out dressage figures of 2018 to review their year and share their personal enterprises, observations, endeavours and opinions on life and equestrian sport. This year we changed the format slightly and went for a heart-to-heart with some dressage personalities.

German Katrina Wüst is a 5* dressage judge and has been the developer of the Degree of Difficulty (DOD) change in freestyle judging. She has also been consulted for the design of the new shortened, Grand Prix test as well as for the 19 recommendations made by Dressage Judging Working Group.

In her own words..

I describe myself as....tired in the morning, hungry for jelly bears in the afternoon, productive in the evening and communicative whenever the phone rings.

Dressage changed me....hopefully not. But during the last decades it gave me the opportunity to meet a large number of wonderful people and we shared great moments.

When I'm not working as a judge...I try to tame my familyn but since this is only occasionally successful, I happily refer to judging

The last time I was embarrassed was...I am more into faces than into names. That puts me into a number of awkward situations. I would like to take the chance to express my sincere apologies to everybody involved.

The last time I cried was...I always cry when a movie has a sentimental moment ... even if it is a comedy. Believe it or not ... it’s possible to cry over ‘Home Alone’ .

My most treasured possession is...my three kids ... even though technically they are of course not my ‘possession’.

The best book I've read is...It has always been Donald Duck ... but after having studied German Literature, I now regard Goethe’s Faust as the all-time classic since it contains the whole universe of human nature in its different facets.

My greatest regret is...that I did not become a famous photographer. For now I stick with designing Christmas cards from my photos. Maybe after my time as a judge I might give it another try