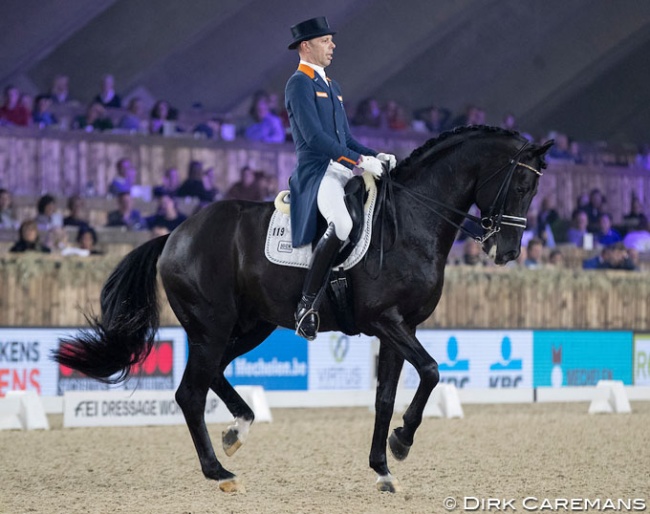 Dutch duo Hans Peter Minderhoud and Dream Boy became the winners of the Grand Prix class at the 2018 CDI-W Mechelen on Thursday 27 December 2018.

After losing World Cup status in 2012, Mechelen is now back on the Western European League world cup calendar and attracted a field of 18 international competitors for this Christmas competition.

The class was judged by Francis Verbeek-Van Rooy (NED), Freddy Leyman (BEL),  Isabelle Judet (FRA), Clive Halsall (GBR), and Jacques Van Daele (BEL) and there were quite a lot of 5% score differences with numerous riders, both at the top and bottom of the ranking.

Hans Peter Minderhoud produced the high score of the class with his 75.780% earning test. His marks ranged between 74.783% and 77.065%. After a successful start at the World Cup qualifier in London two weeks ago, Minderhoud kept the favour of the judges on his side, also in Mechelen.

His 10-year old black stallion Dream Boy (by Vivaldi x Ferro) is a lovely chap. This willing horse gives his all and is full of energy and activity despite a very restless tail. There was much ground cover in the half passes, but he dragged the legs in the rein back. The stallion was expressive and bouncy in the trot extensions, but he was short-long in front with the left front leg consistently reaching further. Also in the extended walk, there was this unevenness in front, but the ground cover was good. In the collected walk he lost clarity in the rhythm. The piaffes were on the spot and with good rhythm, but the first one had some backward tendency and in the second he leant on the forehand. The canter strike off had a double beat behind. Dream Boy executes big flying changes, but the straightness needs to be better. Also all changes to the right are shorter behind. He showed a good, uphill extended canter and small pirouettes. Dream Boy was still very eager to go on the final centerline, and the passage has much lift but the horse hollowed its back a bit too much.

German Helen Langehanenberg and Louise Leatherdale's 16-year old Hanoverian stallion Damsey (by Dressage Royal x Ritual) landed second place with a minimal point difference from the winner. She scored 75.717% and had marks ranging from 73.804% to 78.261%. Helen had to work hard on the robust stallion, but overall the picture is pretty.  Damsey showed energetic trot extensions, and good crossing of the legs in the half passes. All three piaffes traveled too much forward despite the good activity. The passage was lightfooted but not always regular. Damsey showed a very nice extended walk; he was super active, had good ground cover and was clear in the rhythm, but the nose could maybe have been a little more out. In the collected walk he got a bit short and tense in the back. In the two tempi's the changes to the right were significantly shorter, but the ones were smooth though. Langehanenberg rode a nice canter extension. The pirouette left could have been smaller, the right one was better, despite a tiny loss of balance at the end. Swedish Therese Nilshagen and Lodbergen's 11-year old Oldenburg stallion Dante Weltino (by Danone I x Welt Hit II) landed third place with 74.783%. The judges were fairly in agreement about her marks. The combination showed  big bouncy half passes, good energy in the trot extensions even though the ground cover is just enough. Dante Weltino went slightly forward in the first and second piaffe. The extended walk had two hooves overtrack but was short and quick in the rhythm. The stallion anticipated the transition to passage from collected walk. The passage was elastic, but one wants to see him a bit more pulling in the contact. The two tempi changes were even though he swung the hindquarters a bit to the left. The  extended canter was wonderful with so much uphill jump and the zig zag was very nice and effortless. The  one tempi changes started out very nicely, but the horse lost ground cover towards the end of the diagonal. The pirouettes were tiny, with the right one being the best one.  The last transition out of piaffe was difficult, but the final line still had good energy.

The Kur to Music is on Saturday noon 29 December 2018 and will determine who earns the most World Cup ranking points.