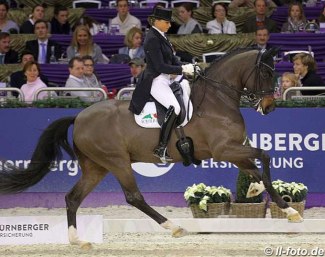 Judged by five of Germany's 5* judges (Schule, Eisenhardt, Plewa, Wust, Holler), the Finals are contested through the Prix St Georges Special, a test designed by late legendary rider Rainer Klimke. It includes the infamous halt and rein back on the centerline followed by an extended trot and final halt and salute.

The 2018 Finals featured twelve riders, the majority of them were Germany's professional elite riders (Werth, Werndl, Schneider, Schmidt, Klimke). Heike Kemmer's student Nicole Kirschnick and Dr. Best were a late entry, substituting for a last minute withdrawal of Thomas Wagner and QC  Fillipo Niro.  They got the spot as the highest scoring pair in the qualifiers that did not get a ticket.

After placing second in the warm-up round with 73.488%, Schneider and Gabriele Kippert's 8-year old German Sport Horse bred First Romance (by Furst Romancier x Day Dream) upped their game in the finals round, scoring a winning 76.537%.

Schneider has had a stellar season on the young gelding First Romance this year, winning the small tour at the CDI Fritzens, CDIO Aachen and CDI Randbol. At the Nurnberger Finals in Frankfurt, she continued that streak of success. Three judges had her in first place and two second.

“I have a  phenomenal horse underneath me and I’m incredibly grateful to the owners that they bought him and entrusted him to me for his training," said Schneider, who rode her 14th Nurnberger Finals in her career.

Isabell Werth and Luca Sophia Collin's 8-year old Hanoverian stallion Descolari (by Desperados x Weltmeyer) were the runners-up with 75.268%. The pair placed first with two judges, second, fourth and sixth with marks ranging from 73.292% to 76.951%.

The winner of the warm up round, Kira Wulferding and Wolfgang Strizke's Westfalian mare Brianna (by Bvlgari x Rohdiamant) could not repeat their feat in the Finals and dropped to sixth place with 73.634%. Wulferding was fourth aboard Ulla Katzorke-Hellweg's Rhinelander mare Bohemian Rhapsody (by Belissimo M x De Niro) on 73.780%%.