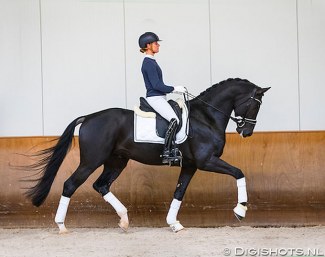 Adelinde Cornelissen has lost her 4-year old Oldenburg licensed stallion Approved on Tuesday 11 December 2018. The stallion did not survive a tragic accident.

The KWPN bred and registered Approved was originally named Jaqiedo. He was by Aquido x Jazz x Juriaan and owned by Aris and Carla van Maanen.

The stallion was approved at the 2017 KWPN Stallion Licensing but failed the 2017 KWPN Autumn Stallion Performance Test in Ermelo after he scored just 5 for rideability/temperament.

The owners were upset and presented him for licensing in Vechta, where he was accepted by the Oldenburg Verband. Following the German rules they have renamed the stallion in "Approved" as he needs to be named after the first letter (A) of the sire, at the same time making a statement with the name to the KWPN society.

"I'm devastated," Cornelissen told Eurodressage. "He was my buddy and I could do anything with him. He gave me such a good feeling. He had so much balance, ground cover and suppleness in his paces and was able to extend and collect in all three basic gaits. He had enormous willingness to work. He was a happy horse and very attached to handle..and handsome."

A saddened Cornelissen also took to Facebook: "no more playing in the paddock, no more cuddles when I arrive at the stable in the morning. No more gallops together on the canter track and in the woods. So unfair and terribly unreal. On Monday after the training, I sent Aris a message saying "Approved I's going to be a really good one. What a delightful horse," not knowing it was our last ride. I had such nice plans for the future with him."