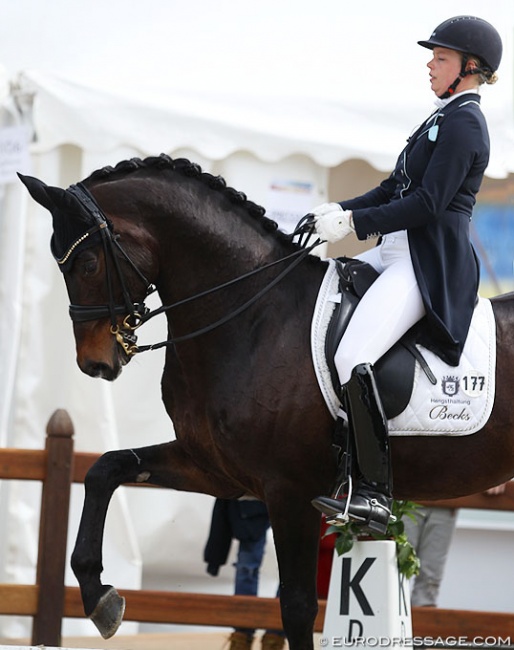 The combinations for the 2018 Nurnberger Burgpokal Finals are ready to compete for the title at the 2018 CDI Frankfurt on 13 - 16 December 2018.

The Nurnberger Burgpokal show circuit with its annual final in Frankfurt is the German Developing Prix St Georges Horse championship for horses between 7 and 9 years of age.  Twelve qualifiers throughout Germany took place from April until the end of October. The winners of each qualifying Prix St Georges Special class are automatically be eligible to compete in Frankfurt.

The high score of the season was achieved by Kira Wulferding on the 7-year old mare Brianna (by Bvlgari). She scored 76.171% at the qualifier in Redefin. Wulfderding is also the only rider to qualify two horses for the Finals. Her second ride is the 9-year old Rhinelander mare Bohemian Rhapsody (by Belissimo M).

Changes to the Entry Field

With only a few days to go one change have been made to the entry field as one combination is no longer together.

The winners of the Bettenrode qualifier, Ann-Christin Wienkamp and Daley Thompson, will not appear in Frankfurt either. Six weeks ago, Daley's owner Christian Becks decided to bring home his 9-year old Westfalian gelding (by Damon Hill out x Lauries Crusador xx)

"Daley and I are no longer a team, which I deeply regret," Wienkamp told Eurodressage. "I would like to ride him in Frankfurt at the Finals,b ecause this is a real highlight for us riders. I‘m sad about that, because we worked a lot together and had many nice successes. Most recently we won our first S***. Daley was a special horse for me and a real friend, who gives bis best for me in every competition. I wish Jil as much fun and success with him."

Isabell Werth's ride Descolari sold more than two months ago to German junior rider Luca Sophia Collin, but Werth is still on the participants' list for the show.  The 8-year old Hanoverian stallion by Desperados x Weltmeyer x Legat won the Donaueschingen qualifier. The pair will most likely briefly reunite for Frankfurt.

The original finalists for the 2018 edition are: