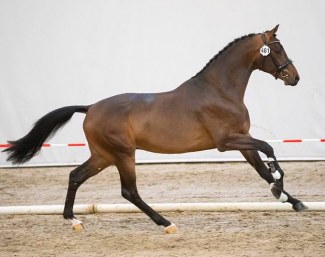 The KWPN licensing committee has selected a group of 92 colts on five pre-selection days on 4 - 8 December 2018 that are allowed to move on to the second phase of the 2019 KWPN Stallion Licensing in February.

The KWPN Stallion Licensing pre-selection days are held in Ermelo, The Netherlands, and the dressage colts were up for inspection on 4 - 8 december 2018. No less than 258 dressage bred colts were assessed over five days.

On the first two days 39 colts received a positive verdict.  On the other three days, 53 colts passed, bringing the tally to a grand total of 92 colts accepted for the second phase!

On the third day on 6 December 2018, 16 colts got a green light to move on to the second phase. The offspring by Ferdeaux stood out on this day with four sons accepted. El Capone had three sons accepted.

On the fourth day on 7 December 2018, another 16 were added to the group. Governor (by Totilas x Jazz) has no less than six sons accepted. Glamourdale had four sons accepted, Toto Jr three.

On the final and fifth day of pre-selection, 21 colts received a positive verdict. Grand Galaxy Win (by Apache) was the stand-out sire with no less than six sons accepted.