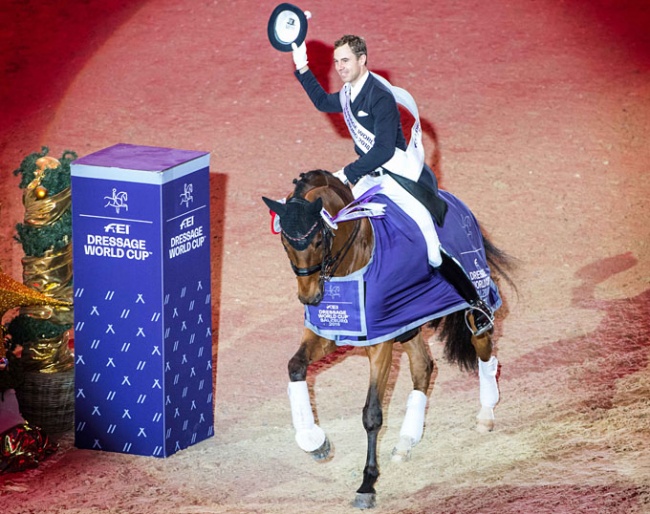 Germany’s Benjamin Werndl (34) threw his hat into the ring for a place at the FEI Dressage World Cup™ Final next April when producing a spectacular victory with Daily Mirror at the fifth leg of the 2018/2019 Western European League in Salzburg, Austria on Sunday 9 December 2018.

The pair’s performance wasn’t perfect, with a few glitches along the way, but the best bits weren’t just good - they were breathtaking. And with only three riders from each nation allowed into the Final, Werndl is putting intense pressure on his German counterparts for one of those slots after moving to the top of the leaderboard alongside compatriot Dorothee Schneider.

It was Sweden’s Patrik Kittel (42) who lined up second with Delatio while Schneider slotted into third with Faustus on a day when all of the leading partnerships really stepped it up to another level. Werndl was almost speechless with delight after topping both yesterday’s Grand Prix and today’s Freestyle.

"This horse is a gift…I’m having an unbelievable trip with him, he’s developed so much over the last few months and I can’t find the right words to describe how much it means to me," said Benjamin Werndl (GER).

Werndl, whose sister Jessica von Bredow-Werndl, was on the gold medal winning team at the FEI World Equestrian Games™ (WEG) 2018 in September, was already lying second on the league table however following his win in Budapest (HUN) in September and points collected for fifth place at both the WEL opening leg in Herning (DEN) in October and the third leg in Stuttgart (GER) last month. It’s been a strong and steady progression, and it was clear today that there’s a lot more to come from Daily Mirror despite the fact that the gelding son of Damon Hill is 14 years old.

“There’s so much more potential in this horse, and now my job is to find out how to bring it out!” said the rider who was on the German long-list for the WEG. “He had a break of two years before he came to us a couple of years ago, so he still feels a bit like a young horse building up experience, and I really wasn’t expecting him to be so cool in this arena today - he’s just the perfect gentleman!” Werndl added.

He was eleventh to go of the 15 starters, and when his test kicked off with a double-pirouette followed by two-tempi changes and another double-pirouette on the centre line then it was obvious he meant business. Daily Mirror’s ground-eating extended walk earned a 9 from four of the five judges as the daring duo marched to the first over-80% score of 80.790. And then he had to sit back and watch four more formidable contenders.

Australia’s Kristy Oatley and Du Soleil posted 79.330 before Patrik Kittel and his new ride Delatio, which was competed by Great Britain’s Emile Faurie until July of this year and was runner-up for the Swede on their World Cup debut in Lyon last month, put 80.010 on the board to slot into second spot. And that’s where they would remain despite a lovely performance from European and World team gold medallist Schneider and her super-exciting “Grand Prix baby” - the 10-year-old gelding Faustus who scored 79.730 for third place.

Now that he has the FEI Dressage World Cup™ Final 2019 in his sights, Benny Werndl really wants to get there, but he knows the battle for one of the German slots is not yet over. “All the other ladies want to go there too, but at least now I have a good chance, and I’m hoping to get to another qualifier in either Amsterdam (NED) or Neumünster (GER) in the new year” he said.