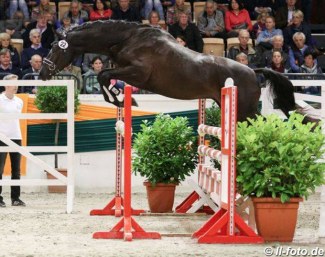 The court has ruled in the case of the 2017 Trakehner Licensing Champion Kaiser Milton (by Millennium x Van Deyk x Gajus).

The court in Kiel had to decide on the ownership issues between buyer Burkhard Wahler and the stallion's original owner, Dutchman Jan Pieter Dalsem who is represented by the German Trakehner society, which sold the horse at auction for 320,000 euro.

Soon after the licensing the stallion turned up lame and unhealthy. Wahler asked for restitution from the Trakehner Society but had not yet paid the auction price, plus 60,000 euro in taxes.

The stallion was treated in the equine clinic, initially for lameness but it was also discovered that he had four leaky heart valves. Wahler stated that the stallion would be unsuitable for sport. However at the end of September, Kaiser Milton did his 14-day stallion suitability test in Schlieckau.  Although he dropped out at the end of the testing, the licensing committee extrapolated him and rewarded him a passing score.

The two opposing parties Wahler and Dalsem/Trahehner society met in court in Kiel, Germany, and  a verdict was cast on 22 November.

The court has decided that Wahler has to pay 381,692.50 Euro as well as the legal fees. Judge Ulf Müller ruled that the verdict is not based on the health of the horse but concerns legal, contractual details which were not properly fulfilled by the buyer according to the right procedures.

Wahler has indicated he will appeal the decision.

Norbert Camp, chair of the Trakehner society, stated afterwards that "to us it is important that the further development of this promising horse and its reputation do not continue to be damaged by the burden and duration of the legal dispute."