Spirit of the Age OLD, VTV Oldenburg Dressage Stallion of the Year 2018 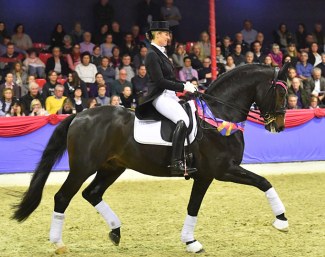 Bernadette Brune's Grand Prix stallion Spirit of the Age OLD has been honoured with the VTV Stallion of the Year title at the 2018 Oldenburg Stallion Licensing in Vechta, Germany, on Saturday 24 November 2018.

Spirit of the Age OLD, born 2004, by Stedinger out of Ultra Davenia by Donnerhall - Rohdiamant, is bred by Michael Mehrtens and owned by Bernadette Brune.

He started his career at the age of three and four with series victories in riding and dressage horse tests under Sascha Böhnke, before he was auctioned in Vechta and started his journey to New Zealand. There he paraded at the age of five to the New Zealand Champion. Back in Germany, the dark bay stallion was able to celebrate several podium finishes in medium class dressage tests in 2011 with Thomas Rive, before Bernadette Brune discovered the dressage talent at the Fall Elite Auction in Vechta 2012.

With Spirit of the Age OLD, she soon succeeded in a meteoric rise in the German and international dressage scene: After the couple had won an Intermediaire I at the CDI** in Biarritz, France, for the first time in 2012, the stallion managed effortlessly to jump into the Grand Prix class and also celebrated at the CDI*** Biarritz his first Grand Prix victory one year later. Due to his many successes in the advanced level class, the imposing Spirit of the Age OLD 2012 was licensed for Oldenburg. The formerly highly successful show jumper Bernadette Brune continued to build up her stallion, so that in 2015 was followed by their first Nations Cup participation at the CDIO*** Vidauban, in which the pair significantly contributed to the victory of the German team with the bronze medal in the Grand Prix. Also at the CDIO***** in Rotterdam, Netherlands, the duo delivered a top ten ranking and was pleased about their first participation in the World Cup in Lyon, France. In the same year, the couple was appointed to the perspective squad due to his achievements and Spirit of the Age OLD was named the most successful Oldenburg horse in Germany. He ranked sixth in the world.

After more than 20 placings in 2016, the stallion and his rider delivered also one success story after the another in 2017. One of their highlights this year was the ribbons at the CDI**** shows in Dortmund and Hagen a.TW. in Grand Prix and Grand Prix Special. His sire Stedinger became Champion Stallion of the Oldenburg Stallion Days in 2002 and two years later became the first Reserve Champion of the main premium. In 2013, the dark bay moved to Australia where after only a few months he was able to win dressage tests up to Intermediaire I and also became Australian Champion in 2014. Stedinger has been one of the top international sires for years and in 2017 ranked eighth in the WBFSH list of the best dressage sires worldwide.

Bernadette Brune on Spirit of the Age OLD, Her Once in a Lifetime Horse