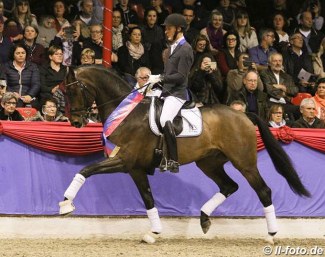 When deciding which stallion is to receive a main premium, not only the stallion’s achievements in sport but also the result of his performance test and, even more important, the quality of his first foal crop, are deciding factors.

The main premium in the dressage sector went to Zackerey, born 2014, by Zack out of Overgaard’s Hit Me (by Sandro Hit - Solos Carex), bred in Denmark by Tove and Ove Möller Nörgaard and owned by Blue Hors Aps from Denmark. This stunning mover with a huge engine behind was licensed in Vechta 2016. The elegant dark-bay stallion finished his 14-day test with a final dressage score of 8.0. From his excellent first foal crop, Zackerey already delivered the beautiful filly Zara for the Elite Foal Auction this year, which was knocked down for a top prize.

The Ib main premium for stallions with focus on dressage was awarded to Finest Selection OLD, born 2014, by Follow Me out of Laetizia by Lauries Crusador xx - Donnerhall, bred by Heinz-Hermann Leismann from Tecklenburg, and owned by Dressurpferde Leistungszentrum Lodbergen, Löningen. Last year, the black stallion triumphed as the Bundeschampion as well as the Oldenburg State Champion of the three-year old stallions. He finished his 14-day test in Adelheidsdorf with a final dressage score of 9.29. His sire Follow Me OLD was Champion Stallion of the Oldenburg licensing 2012, winner of his stallion performance test, State Champion and won the Ib main premium as well as his son now.

The third place went to Fürst Fabrice OLD, born 2014, by Fürstenball out of Casablanca by Sandro Hit - Castro, bred by Arnold Wegbünder, Nordhorn, owned by Adrian Gasser from Switzerland. The stallion was celebrated Oldenburg Licensing Champion in 2016. Last year, he completed his 14-day test in Adelheidsdorf with the second highest final dressage score of 8.55, where he received the 9.0 for the trot and rideability. He finished sixth at the 2018 Bundeschampionate. Fürst Fabrice OLD's sire Fürstenball OLD was Oldenburg Champion Stallion 2008, main premium winner 2010, Bundeschampion 2011 and is one of the most important masters of Furioso.