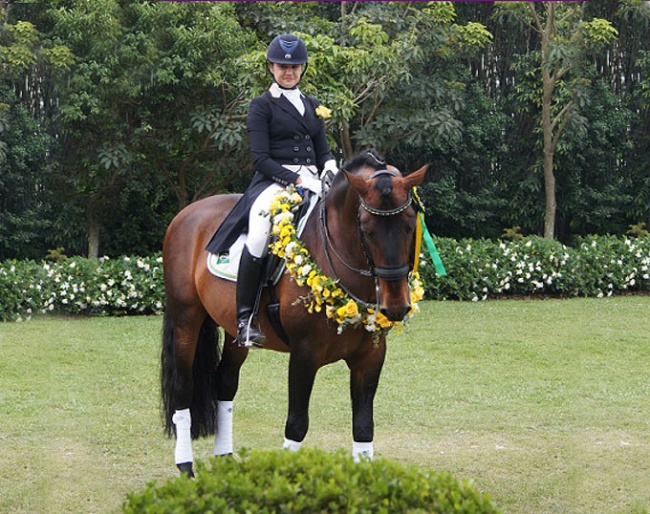 The Brazilian Dressage Championships at small and big tour level took place over two rounds with the results added determining the overall ranking.

Just three pairs contested the small tour championship which was won by Sarah Waddell on the 9-year old Westfalian mare Baccara H (by Basic x Florestan). Sourced at Hof Kasselmann in Hagen, Germany, Baccara is owned by Marcelo and Sophie Baptista de Oliveira. Waddell scored 68.647% in the Prix St Georges on Saturday and 73.140% in the final round on Sunday to total a winning 141.787 points. The silver medal went to Bruno de Certaines on his own 15-year old Westfalian Finesse (by Ferragamo) with 66.735% in round 1 and 67.860% in round 2 (total 134.595). The third place went to Giovana Pas on Assalto MVL, a 13-year old Lusitano by Soberano. She scored 67.206% in the first round but was eliminated in the second round.

The Brazilian Dressage Nationals also featured young horse classes but aside from the four year old division, the other age divisions had a very low attendence with only one combination in the 5 and 7-year old class.

Cristiano Augusto Da Silva steered Anna Maria Capella Mantega's Brazilian sport horse bred Italy AMM (by Sir Donnerhall out of Briallette) to the title in the 6-year old division on 7.86 points.  Jeferson Rodrigo Pereira topped the board as only rider in the 7-year old division on Eduardo Bundyra's Lusitano bred Goya Crystal (by Unico out of Zoe Crystal) with 7.26 points.