Schneider and Pathétique Lift Off at 2018 CDI Randbøl 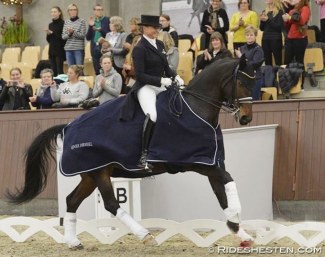 German Olympic and WEG team rider Dorothee Schneider made her international show debut on yet another rising Grand Prix star, Pathétique, at the 2018 CDI Randbøl on 9 - 11 November 2018.

Schneider and Sissy Max-Theurer's Pathétique bagged the Grand Prix Special victory with 75.064% at the Blue Hors Dressage Festival after finishing third in the Grand Prix with 71.152%.

Both Faustus and Pathetique came along to Blue Hors stud. Bernd Heicke's 10-year old Hanoverian Faustus (by Falsterbo x Forrest xx) did his fifth CDI in his first year at international Grand Prix level. In Randbøl he was second in the Grand Prix with 73.957% and second in the freestyle with 77.725%.

Sissy Max-Theurer's 10-year old German sport horse bred Pathétique (by Quaterback x  Casado x Royal Dance) is the talk of the town, however, as the horse was able to post 75.064% on the board at its first CDI. Pathétique, originally named Patty GE, was first started by Nicola Haug as a young horse in 2012. In 2015 Anna Casper took over the ride and competed her at M-level.  That was also in the year that Sissy Max-theurer acquired her.

"I bought Patty as a 7-year old old from Volker Wulff," Max-Theurer told Eurodressage.  "I see a lot of potential in this talented and sensitive horse and I am very happy that Dorothee and her work so well together. We will see what she will give us in the future. Patty is in bred on the famous P-Line from Neustadt/Dosse and we expect an ET foal from her by Eichendorff."

Schneider made her show debut on Patty in June 2018 at Intermediaire II level. The pair did its first classic Grand Prix test at the regional show in Fuldabruck in October. They proved their promise on the international stage last weekend.

"Pathétique made a significant development the last few weeks," Schneider told Dressursport Deutschland. "I was super happy with the third place in the Grand Prix, but the result in the Special makes me extremely proud. She shows her quality in the passage tour and gets 8 and 8,5 for that. I'm proud of the progress this fun mare has made and shows such good performances, despite her young age and lack of experience."