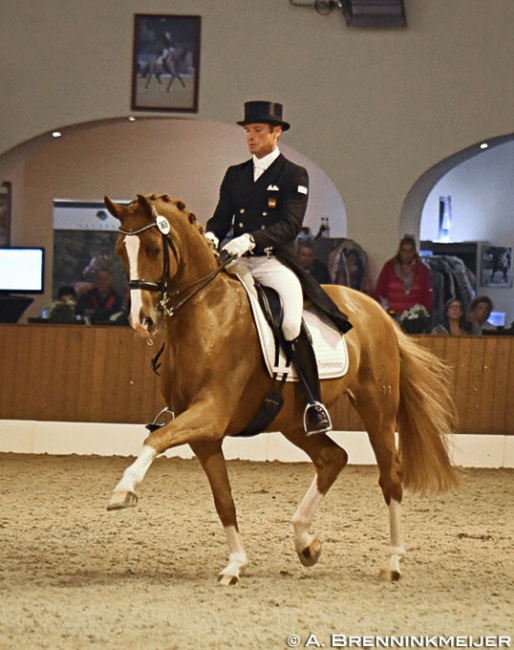 Carrascosa is reunited with the talented chestnut gelding as Nadine Capellmann opted not retain the ride after a one-year lease.

Equestricons Lagerfeld K is by Londontime out of Donna Pia (by Don Crusador). He is bred by Frank Guenger and owned by Jochen Arl.

Under Borja Carrascosa the handsome gelding made his international show debut at small tour level at the 2017 CDI Saumur, where he twice scored over seventy percent to place second and third.

Lagerfeld K was originally purchased by Arl as a 2020 Olympic hopeful for his daughter Antonia and she was highly successful with him at international junior rider level in the spring of 2017. However Antonia decided to put her dressage career on the back burner and focus on school.

Carrascosa works closely together with Capellmann; not just this year with Lagerfeld K, but he also rides her 7-year old Westfalian gelding Waitoni (by Wynton x Weltmeyer), which Nadine purchased from Jochen Arl in the autumn of 2017.

Lagerfeld K moved to the Spaniard's barn in Krefeld, Germany, four weeks ago and in their short time together, the horse has proven its rideability and talent as well as its readiness as a future elite Grand Prix horse to be sold to a new rider. Borja has fine-tuned the Grand Prix buttons and the pair was off to a flying start in the Grand Prix competition arena.

"I’m really happy with Lagerfeld," Carrascosa explained. "He did his first Grand Prix and showed great highlights like his piaffe and passage, half passes and pirouettes. He was very elastic and really with me throughout the test. He has a lovely character and a lot of potential. I really think he is an exciting prospect for the future."