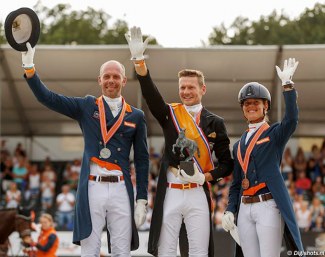 The Dutch Equestrian Federation has announced that the 2019 Dutch Dressage Championships have been scheduled for May instead of July.

With the 2019 European Championships being hosted in Rotterdam on 21 - 25 August, the 2019 Dutch Championships will serve as first team selection and observation trial. The CDIO Geesteren on 17 - 23 June 2019 will be the second trial.

The last few years the Dutch Nationals were hosted in July, either coinciding with the CDIO Aachen or being held just the week before, which led to much disgruntlement from the Aachen show organizer, as well as the Dutch riders.

"The upcoming edition of the Dutch Championships will be earlier in the year that we are used to," said KNHS technical director Maarten van der Heijden who is also the ad-interim chef d'equipe since team trainer Rien van der Schaft resigned.

"There were a lot of request to hold the Nationals earlier in the season and we are responding to that. Now we have the opportunity to send strong teams to the nations cups in Falsterbo and Aachen," Maarten added.