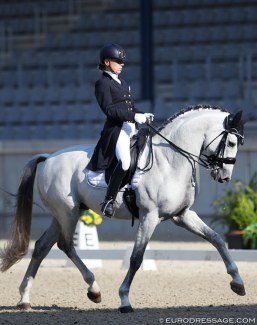 Belgian dressage horse breeder and stallion owner Brigitte de Biolley has been a long-time supporter of former Belgian youth team rider Katrien Verreet. Through their collaboration Verreet was able to make her break through at international Grand Prix level.

With the two Grand Prix stallions she made her own international Grand Prix debut in 2017 and the past two years competed at CDI's such as Lier, Compiègne, Waregem, Roosendaal, Aachen, and Rotterdam, which was her last international in June 2018.

Brigitte de Biolley told Eurodressage that "differing views on training methods" have led to the end of the collaboration.

"Our collaboration has been ended in mutual agreement," Verreet told Eurodressage. "I will continue my own road, together with my father and own horses, especially youngsters aiming for the World Championships."

De Biolley will now quietly look for a new rider for her stallions and up and coming youngsters.

"Our collaboration has given Katrien many opportunities and opened a lot of doors for her and it was also good for me to have my stallions and horses in the picture," Brigitte de Biolley told Eurodressage. "I'm not in a hurry to return to the highest level. It's more slavery than pleasure."