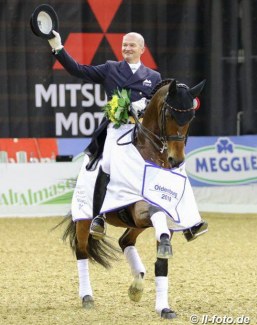 Hubertus Schmidt on Imperio, Marcus Hermes on Abegglen, and Kathleen Keller on San Royal became the winners of the three international big tour classes that were held at the 2018 CDI Oldenburg in Germany, on 2 - 4 November 2018.

The Grand Prix featured 18 combinations and the German 2016 Rio Olympic reserve pair, Hubertus Schmidt and the now 15-year old Trakehner stallion Imperio (by Connory x Balfour xx), topped the board with 73.761%. The long legged Trakehner stallion has been absent from the show ring for six months with his last start being the CDI Wiesbaden. In Oldenburg judges Richenhagen, Peutz, Colliander, Svalling, and Hess rewarded the progress the pair has made and scored the test a winning 73.761%. Anabel Balkenhol and the Imperio son Heuberger TSF were second with 72.565%.

Nine combinations opted to ride the Grand Prix Special, which was won by Marcus Hermus aboard the Baumgurtel family's 8-year old Abegglen (by Ampere x Carabas). The duo which also competed on the Louisdor Cup show circuit this year, posted 73.170% for the victory, ahead of Balkenhol and the 11-year old Heuberger TSF. Schmidt and Imperio were third with  72.574%.

"He doesn't do many shows," Hermes said about his very young Grand Prix horse Abegglen, "and this was our first real Grand Prix Special and we won straight away.  He has everything, he can do everything. I've never had such a good horse before."

Eight pairs chose to compete in the Kur to Music on Sunday. The class was won by Kathleen Keller aboard her own, 11-year old Oldenburg bred San Royal (by San Remo x Grand Royal). The combination posted 76.935% on the board for the trophy. Ingrid Klimke and the 10-year old Hanoverian stalion Franziskus (by Fidertanz x Alabaster) were the runners-up with 74.835%.

"It's hard to put into words just how much this victory means to my parents and me," said Keller/ "Sunny has been with us since he was 5 years old and we are thrilled to be celebrating another freestyle victory today in Oldenburg."