Quite Chacco, Price Highlight of the 2018 Hanoverian Autumn Elite Auction 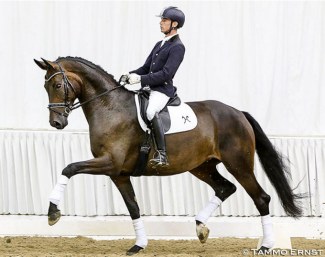 The show jumper Quite Chacoo became the price highlight of the 2018 Hanoverian Autumn Elite Auction in Verden, Germany, on Saturday 13 October 2018.

The 5-year old mare Future of W (by Furstenball x Windspiel As) was the second most expensive horse. A double Bundeschampionate participant, this Rhinelander bred mare sold for 125,000 euro to Sachsen-Anhalt.

The collection also including 19 young stallion prospects as well as a selection of foals. The most expensive stallion prospect was the 2-year old Quick Decision (by Quaterhall x Rotspon), which fetched a price of 39,000 euro to move to an Olympic trainer from Baden Wurttemberg.

The most expensive foal in the collection of 38 was filly Fabulosa (by For Romance x Depardieu), which sold for 62,000 euro.

The average price for a young sport horse at this auction was 34,704 euro, a young stallion prospect cost 18,211 euro on average, while a foal was 9,945 euro on average.