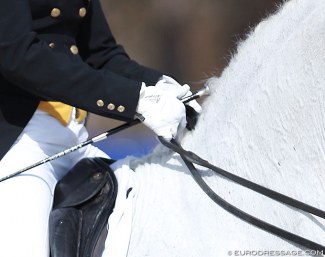 I am always curious watching riders who, on a very light rein, and sometimes even with a soft seat and legs, bend their horses head to the left and then to the right, slowly without strong hands, as if to supple the horse.

Biomechanics expert Dr Hilary Clayton agrees and says that in fact bending the neck of the horse in isolation is only beneficial when the horse is stationary.

“When doing carrot stretches (placing a carrot around and behind the horse) with a standing horse, neck bending is good and is an effective way to strengthen not only the muscles that bend the neck and back but also the small stabilizing muscles that are very important for protecting against injury,” Hilary explained. “Although a large range of neck motion is possible when the horse is standing, it is not desirable to have such a large range of motion when the horse is moving."

Hilary states that the horse’s neck column is supposed t­­o be stabilized during locomotion, especially at the faster gaits – trot, canter, gallop.

“If the intent is to supple the neck, it is more effective to do the suppling work at halt because, as stated earlier the neck should be a stabilizer during movement," she explained.

This means that the neck helps the horse to find balance in locomotion, and for me also channels the energy and engagement of the horse.

I wondered then is there a big difference between bending the horse's neck in motion with short reins (roll kur) and doing the same action with long reins?

“In a horse that is familiar with being trained in a rollkur position it can be done without a great deal of rein tension. In a horse that is unfamiliar with the position, it is likely to require greater rein tension (shorter reins) in the initial attempts. As far as I know the effects on the muscles and joints are similar except that there may be more muscle co-contractions when there is greater rein tension – this means the opposing muscle groups are acting somewhat in opposition to each other,” said Hilary.

I have found that there is often a lot of confusion between bending the neck and flexion of the jaw!

Riders tend to think they are flexing the jaw to soften the horse's neck and mouth but it is often exaggerated by riders with stiff hands and arms and so the horse is forced to bend the neck. It is often difficult to explain to riders the concept of flexion if they have not felt it as it’s a very elastic and subtle rein aid.

“The flexing to the inside should be at the junction between the horse’s skull and the first vertebra in the neck (atlanto-occipital joint),” Hilary explained. “This puts the horse “in position” to the left or right.”

It is behind that joint that the neck bends to the side, but Hilary supports the idea I mentioned above saying that “the amount of neck bending should match the curve of the circle or turn!”

“Flexion is yielding of the jaw and is only a small amount of movement – certainly not side to side movement of the horse’s head which is usually caused by a rider who doesn’t understand flexion.”

Related Links
Flexions and Flexibility: Part I
Flexions and Flexibility: Part II
Classical Training: Bending, How Much is Too Much?
Mastering Lightness: Understanding the Biomechanics
The Effect of a Saddle Positioned Laterally to the Equine Vertebrae on Rider Biomechanics
9th February 2010 - Redefinition
FEI Round Table Conference Resolves Rollkur Controversy
The Effect of the Pessoa Training Aid on Temporal, Linear and Angular Variables of the Working Trot