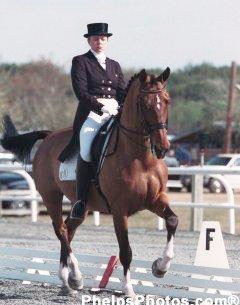 American amateur Grand Prix rider and celebrated fiction novelist Tami Hoag had to say goodbye to her 31-year old Dutch warmblood mare Feliki (by Aktion out of Zeliki). The 1987 born bay mare was competed internationally by Madeleine Vrees in 1999 and 2000. While on a shopping trip in Holland with her trainer Betsy Steiner to buy a young horse, Hoag crossed paths with the then 13-year old Feliki (in 2000) and also purchased Feliki as a schoolmaster. "In only our fourth show together Feliki was high score Grand Prix horse at the Palm Beach Derby. She won a $10,000 freestyle at 21, and that young horse never amounted to anything but a pile of bills and heartaches," said Hoag. "(She was) my first and longest Grand Prix partner, the horse who taught me so much and took me so many places. It was an incredible privilege to be accepted by Feliki. She did not suffer fools. I don't know who she might have been in a past life, but surely she wore a crown."

Toulouse, Parzival's 18-year old full sister by Jazz x Ulft, has passed away. The elite preferent prestation broodmare delivered 14 foals in her lifetime, amongst them Jeanine Nieuwenhuis' ride Genua TC (by Charmeur). The chestnut Toulouse was based at Jan Streppel's yard and had a foal on the ground this year, Notre-Dame-STRH (by Franklin). Toulouse has a twin sister, the late Tuzla who produced the KWPN licensed Armani (by United).

Belgian Under 25 Team rider Soraya Brison got engaged to her long-time boyfriend Jonas Nicque on 5 September 2018 during their summer vacation on Yialos beach in Corfu, Greece. Brison, who competed Giorgio Armani (by Goethe) at the 2018 European Under 25 Championships in Exloo, is an accountant by profession.

Spanish based Dutch Grand Prix rider Brigitte van der Hagen has sold her Grand Prix horse Rupert to New Zealand. Rupert is a 15-year old Oldenburg gelding by Rosario x Inschallah AA which Van der Hagen trained and competed from young horse level up to Grand Prix. The grey gelding will now become a schoolmaster for the New Zealander Tom Oldridge, who is based in Gescher, Germany. Van der Hagen will continue her career with the 8-year old trakehner mare Feuerkrantz (by Editorial x Gribaldi) and the 4-year old KWPN gelding Jesperado (by Desperado x Tango).

The Saxonian-Anhalt state stud in Prussendorf, Germany, has been sold to a private investor. A Radegast based brood farm owner acquired the state stud as the sole person who made an offer on it. The stud will be privatized on 1 October 2018.

Belgian FEI rider Larissa Pauluis has been significantly absent this 2018 spring and summer show season. The reason for this absent is a joyful one. Larissa has become a mother to baby girl Josephine on 26 June 2018. Congratulions! Pauluis is already back in the saddle and won the 2018 French Young Horse Championships with her 6-year old Westfalian stallion Valentin.

Dutch FEI rider Chantal van Lanen had to put down her 20-year old Grand Prix horse Revival (by Kelvin). Chantal's last international competition was the 2016 CDI Deauville, where she rode Revival in the medium tour Inter B and the Inter II. In January 2018 Van Lanen announced that Revival had been leased to Young Rider Elles van Asseldonk as the bay gelding too fit to be retired to the field. Revival fractured his pastern bone in the field at Van Asseldonk and could not be saved. The gelding, who had been 12.5 years injury free, was euthanized three and a half weeks ago.

Andreas Helgstrand has been nominated for the title "Entrepreneur of the Year Denmark", supported by Ernst & Young, a multinational professional service and accounting firm. Founded in 2008 Helgstrand Dressage is one of the world's leading horse dealing yards with a focus on dressage. The company has facilities in Denmark, Germany and Wellington, Florida, hosts the CDIO Uggerhalne and was title sponsor for dressage at the 2018 World Equestrian Games.

St. Georg reported that Gestut Birkhof has sold the 5-year old licensed stallion Agassi (by Ampere x Quaterback x Samba Hit) to the U.S.A.. Bred by Klaus Tuchen, the Oldenburg registered Agassi has been sold to an Ohio based rider who does both dressage and eventing.