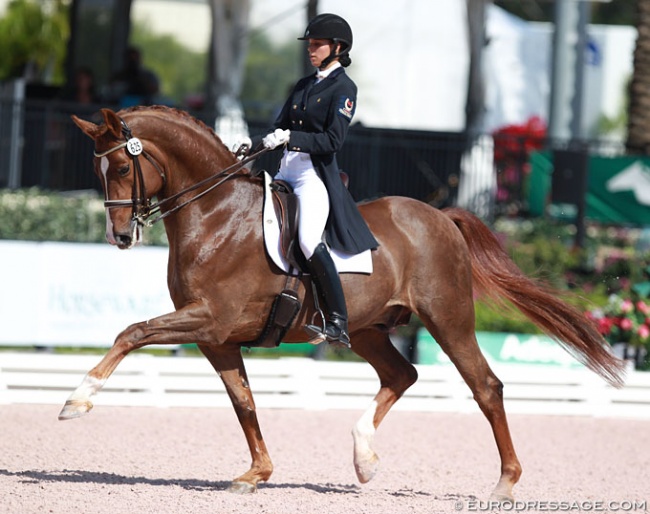 British Under 25 Grand Prix rider Ellen McCarthy has added a new iron in the fire to her string of horses: the 14-year old Hanoverian gelding Belafonte.

The liver chestnut Belafonte is bred by Ingo Rosenberg and is by Belissimo M out of Wendy (by Wendekreis).

The stunning gelding with his high class gaits first came into the spotlight as a 5-year old in Belgium, where he was ridden by Dominique Mohimont and owned by Maximilien de Croy. Mohimont and Belafonte represented Belgium at the 2009 World Young Horse Championships in Verden, Germany, and finished 14th in the consolation final. They were fifth at the 2009 Belgian Young Horse Championships.

In 2014 Belafonte sold to the Fiducie Naga Trust, a company of the parents behind Canadian young rider Naima Moreira Laliberté, through German horse dealer Jochen Arl and his Finnish business partner Henri Ruoste who had trained and prepared the horse for FEI level work.

Moreira Laliberté and Belafonte made their international debut in June 2014 at the CDI Cedar Valley, winning both the team and individual test. Moreira rode Belafonte for Canada at the 2015 North American Young Riders Championships in Lexington, where they won individual test bronze and kur gold. 2016 was their last competition season together.

Two months ago, the German based Ellie McCarthy discovered Belafonte for sale at Andreas Helgstrand's yard and purchased the stallion as a second Under 25 Grand Prix horse alongside her Oldenburg stallion Sir Lancelot M (by Lordanos). She trains with Helen Langehanenberg.

"He's so sweet. The nicest, most relaxed character ever," a thrilled McCarthy told Eurodressage about her new ride.  The duo is set to make their international debut at the 2018 CDI Le Mans in France.